Looking at this pic, I can think of two good reasons to go see Fast & Furious 6 and no, they aren't Vin Diesel and The Rock.

Life is good for Gina Carano.

The former Strikeforce star and trailblazer for today's crop of female fighting talent, including Ultimate Fighting Championship (UFC) Women's Bantamweight Champion Ronda Rousey (hear what "Rowdy" said about her here), looks to be a permanent fixture in Hollywood.

While her big screen debut in "Haywire" failed to deliver any box office beatings, Carano was quickly invited back to "Tinseltown" for this year's "In the Blood" as well as a female version of "The Expendables."

Those films, however, will likely pale in comparison to the kind of coin generated by Fast & Furious 6, where she plays "Riley" and actually gets to show off some of her moves opposite fellow leading lady Michelle Rodriguez (see a clip of their tussle here).

"Conviction" made her debut on the red blue carpet yesterday for the Fast & Furious 6 movie world premiere at The Empire from Leicester Square on May 7, 2013 in London, England.

Carano actually flirted with the idea of returning to combat sports and even went so far as to book herself in a return fight against Sarah D'Alelio back in 2011; however, she was subsequently forced off the card for undisclosed medical reasons.

A return to the cage at this point in her career, seems highly unlikely, though she still refuses to rule it out. 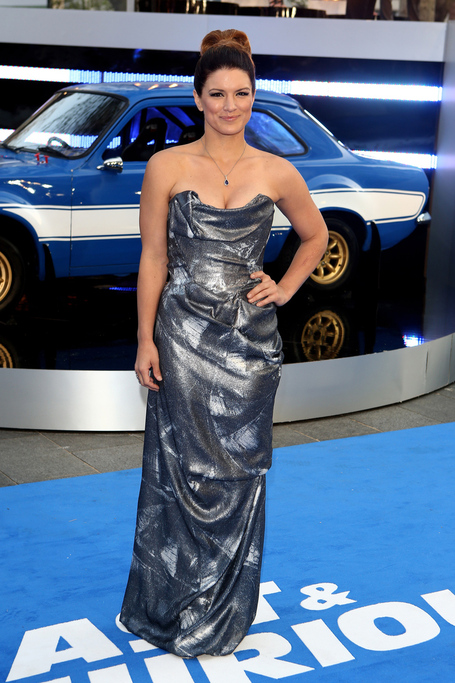