Pic: Bellator 96 full poster for ‘Chandler vs. Jansen' on June 19 in Oklahoma

Bellator MMA has released its full poster for Bellator 96 featuring Michael Chandler vs. Dave Jansen, Muhammed Lawal vs. Seth Petruzelli, War Machine vs. Blas Avena and more. It all goes down on June 14, 2013, from the Winstar World Casino in Thackerville, Oklahoma.

Share All sharing options for: Pic: Bellator 96 full poster for ‘Chandler vs. Jansen' on June 19 in Oklahoma

Bellator MMA is currently on a hiatus after its debut season on Spike TV in Jan. 2013, but the promotion won't be away for long, as on June 29, 2013 the organization will kick off its "Summer Series" with Bellator 96: "Chandler vs. Jansen" from the Winstar World Casino in Thackerville, Oklahoma.

Check out the latest version of the fight card here.

Leading the charge is the return of reigning Bellator lightweight champion Michael Chandler as he puts his title on the line for the second time against Dave Jansen, a man who earned his title shot by stringing together an impressive 6-0 record under the Bellator banner.

The co-main event will see another anticipated return to the Bellator cage as Muhammed Lawal looks to rebound from a shocking upset knockout loss to Emanuel Newton when he takes on well-traveled journeyman Seth Petruzelli as part of the four-man "Summer Series" light heavyweight tournament.

The other side of the bracket features former Ultimate Fighting Championship (UFC) 205-pound title challenger Renato Sobral against Jacob Noe.

Rounding out the main card is a lightweight match up as the controversial War Machine makes his Bellator MMA debut against six-fight World Extreme Cagefighting (WEC) veteran Blas Avena.

It's shaping up to be another solid show for the promotion, which is rapidly approaching its 100th event mixed martial arts (MMA) event. For more news and notes on the event, click here. 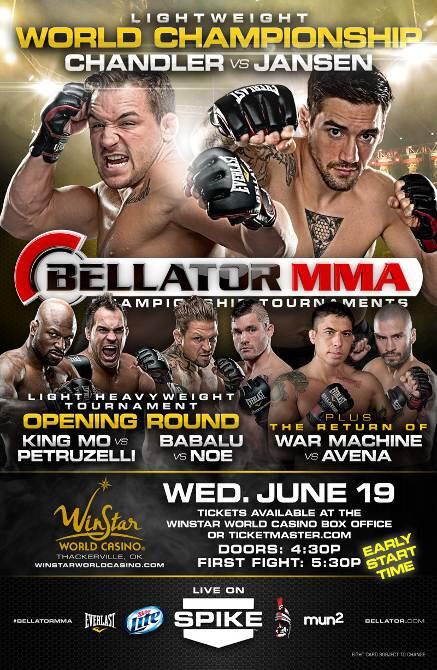