UFC 160: ‘Bigfoot’ Silva posts photo evidence of 'illegal blows' to back of head from Cain Velasquez

Share All sharing options for: UFC 160: ‘Bigfoot’ Silva posts photo evidence of 'illegal blows' to back of head from Cain Velasquez

At the UFC 160 post-fight press conference, Antonio Silva cried foul at the placement of of Cain Velasquez's punches (see for yourself here) following his first round beat down at the hands of the Ultimate Fighting Championship (UFC) heavyweight champion in Las Vegas, Nevada, over the Memorial Day Weekend.

After getting clipped early by Cain in the opening moments of round one, the American Kickboxing Academy (AKA) standout proceeded to unleash a bevy of unanswered blows to "Bigfoot's" head, which eventually forced a stoppage from referee Mario Yamasaki.

Silva immediately protested the stoppage, but, the damage was done and Cain had, yet again, defeated the massive Brazilian in the very first round in a span of 12 months to retain his 265-pound strap.

Since his claims of "illegal punches" went unanswered, Silva took to his Instagram account today (May 29, 2013) to post these photos of the back of his head to show bruising that he says was caused by Cain's punches. 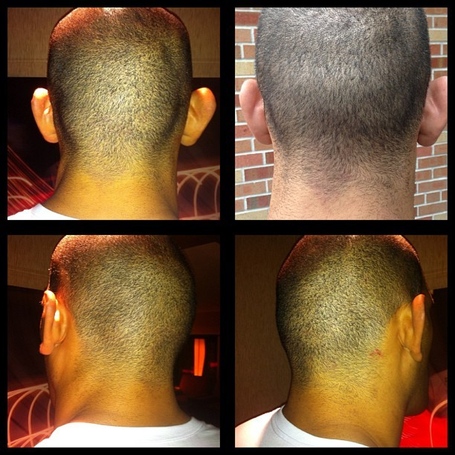 Along with the photos, Silva posted a message saying he isn't trying to make excuses for his loss, he just wants to show that the punches were indeed foul. Furthermore, "Pezao" says he would have rather been knocked out cold in order to erase any doubt.

"Winning or losing is part of sport and every professional athlete has prepared for these kinds of results, sometimes it's how you lose. The photo above on the left was taken hours after the fight and on the right was taken today, was told by several people that I took blows to the back of the head where it is considered irregular blows, just see the pictures and video of the fight to confer ... I do not want this making excuses for my loss would have rather been knocked over without conditions to raise or terminated than have lost in my view unfairly ... Blow to the ear does not get swollen like part of the rear of the head."

While many fight fans have concluded that the bout would have been stopped after a few more punches anyway, Silva still isn't a happy camper.

For the record, both Velasquez and UFC president Dana White agreed with the stoppage.

What's your final verdict, Maniacs? Does the photographic evidence prove that "Bigfoot" has a legit beef with Cain's placement of his punches?

Or should Silva just suck it up and move on?