UFC on FOX 7 is just around the corner and earlier today (April 18, 2013), the eight fighters participating on the televised main card went nose-to-nose in a preview of this weekend's fisticuffs in San Jose. Check it out!

Ultimate Fighting Championship (UFC) recently snuck off a pre-fight press conference for its upcoming UFC on Fox 7: "Henderson vs. Melendez" event, which goes down this Saturday night (April 20, 2013) at the HP Pavilion in San Jose, California.

All four main card match-ups were represented today (April 18) by their respective participants.

That means we get a sneak peek at this weekend's action as all eight fighters came nose-to-nose (kinda) for staredowns. While tepid as far as face-offs are concerned (you could park a Buick between "Smooth" and "El Nino"), there will be plenty of up-close and personal action in the "Shark Tank."

All pics courtesy of Esther Lin for MMA Fighting. 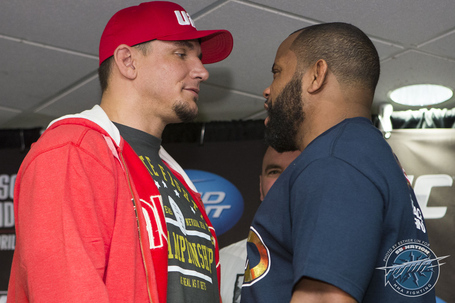 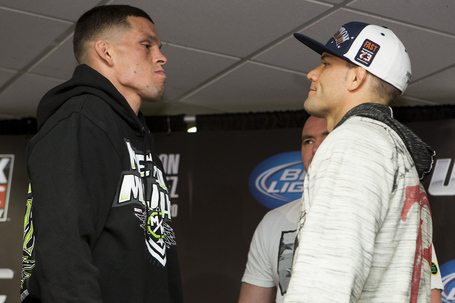 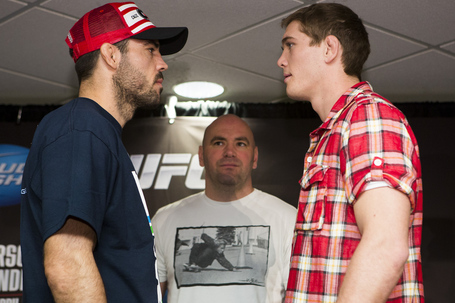 MMAmania.com will provide LIVE round-by-round, blow-by-blow coverage of the main card action on fight night (Sat., April 20, 2013), which is slated to air at 8 p.m. ET on FOX. The latest play-by-play fight updates of the live action will begin to flow earlier than that, however, around 3:30 p.m. ET with the "Prelims" undercard bouts on Facebook and FX Channel.

For all the current news and notes on UFC on FOX 7: "Henderson vs. Melendez" be sure to check out our complete event archive right here.