We have "Kings and Champions" fighting on April 5 in Singapore. See for yourself.

Share All sharing options for: Full Fight Card Released For ONE FC: 'Kings & Champions' in Singapore on April 5th

ONE Fighting Championship today released the full fight card for its April 5 card in Singapore which is headlined by a title bout between Shinya Aoki vs. Kotetsu Boku and is also going to feature fighters from India, Pakistan, Thailand, Malaysia and the Philippines.

In total there are 10 fights on the card with ONE FC again focusing primarily on Asian fighters with a few big names from around the world thrown in for good measure. The night is going to get underway with a flyweight fight which will pit Singapore against Malaysia when Ronald Low takes on Chen Yun Ting.

Singapore is the headquarters of Asia's biggest mixed martial arts (MMA) promotion and this will be the fourth ONE FC show to take place there but local fighters have had mixed results with both Radeem Rahman and Kim Hock's careers having been derailed by serious injury.

Low, whose pro MMA record currently stands at 1-0 and is unbeaten in amateur Muay Thai, will be looking to step up and fill that void when he takes on Malaysia's Ting, who has a background in amateur MMA and will be making his professional debut.

The second fight of the night sees Indian fighter Nur Muhammad make his professional debut when he takes on American wrestler Jake Butler, who is coming off an impressive win at ONE FC: 'Return of Warriors' when he stopped Antonio Romulo early in the opening round.

Muhammad was originally set to take on Brazilian Jiu-Jitsu (BJJ) brown belt Rafael Lopes at Soul of Fighter 'Asian Warriors' in Calcutta last August but the event was cancelled. The Indian has supposedly spent time training in Taiwan and been involved in numerous amateur MMA fights.

The main card is going to be broadcast live all across Asia by Star Sports and the first fight on the televised portion of the card is an intriguing one because it pits Pakistani featherweight Bashir Ahmad against Thailand's Shannon Wiratchai.

After winning two fights out of two for DARE in Bangkok Wiratchai made a dramatic entrance with ONE FC when he stopped Mitch Chilson early in the second round of their fight in Manila. Unfortunately, the win was subsequently scratched off because of an illegal soccer kick which the referee failed to spot but the rules have changed since then and the Thai fighter won't have any such issues if he manages to do the same thing to his Pakistani opponent.

Ahmad is a real pioneer of Pakistani MMA whose career has been limited to one pro fight, which he won, because of his commitments as a referee, promoter and coach. He has a blue belt in BJJ and has trained extensively in Muay Thai and with both men unbeaten and representing countries which have a growing interest in the sport but few successful fighters to show for it this should be a fascinating contest.

The fourth fight to be announced this morning sees four time Wushu world champion Rene Catalan booked for his MMA debut against BJJ black belt Alex Silva. Catalan is famous in the Philippines for winning numerous medals and representing the country in Wushu tournaments and competitions all over Asia and will bring some world class striking into the ONE FC cage.

Silva is a BJJ world champion who dropped a decision to Geje Eustaquio at ONE FC: 'Battle of Heroes' in Jakarta last year and will want to bounce back by beating the Filipino. This looks set to be a good old fashioned 'striker vs grappler' sort of match up which will probably finish in a first round submission or knock out.

The rest of the card, which features the likes of Aoki, Boku, Melvin Manhoef, Jens Pulver, Masakatsu Ueda, Kevin Belingon and Eddie Ng had already been announced and can be seen below. 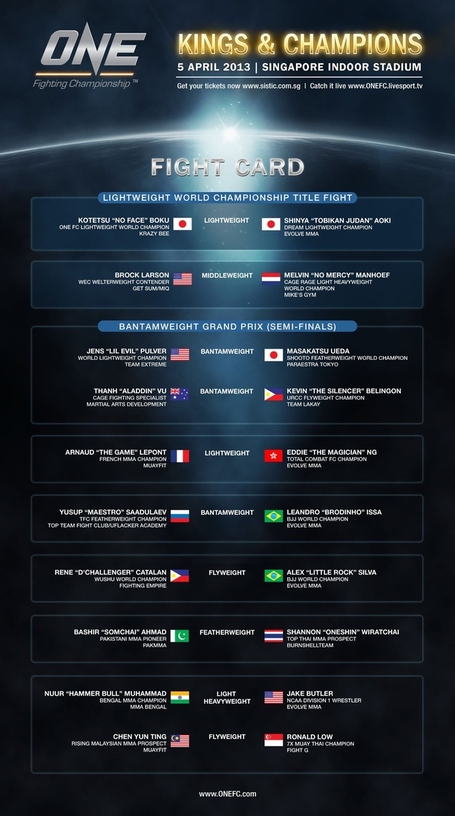