Now that the dust has settled and the smoke has cleared in the wake of UFC 158: "St. Pierre vs. Diaz," the SB Nation crew has tallied the votes and come up with the 10 best fighters competing at 170 pounds. Have a look.

UFC 158: "St. Pierre vs. Diaz" is officially in the books (results here), which means all six of the welterweights competing on the pay-per-view (PPV) fight card had the potential to shake up the division's top 10 rankings.

Most fight fans (and pundits) had Georges St. Pierre and Johny Hendricks at number one and two, respectively, and with both of them earning wins last weekend in Montreal, that won't change.

Then we have Jake Ellenberger and Carlos Condit.

"The Juggernaut" was victorious and "The Natural Born Killer" was not, so we asked the SB Nation panel -- compiled by MMA Mania, MMA Fighting and Bloody Elbow -- to sort through the top 10 for Ultimate Fighting Championship (UFC) and beyond. 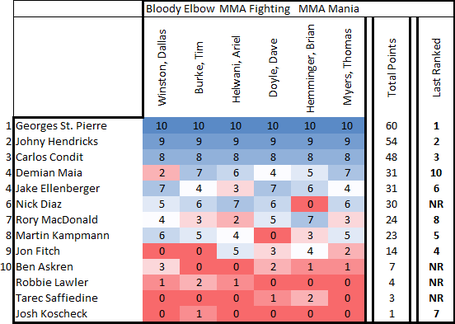 See how they compare to the "official" UFC rankings by clicking here.

Looks like we have a tie between Jake Ellenberger and Demian Maia. Who is the rightful owner of number five? You've heard from us, Maniacs, now let's hear from you.