This is what you can expect when you punch a head the size of Montana (just ask Daniel Cormier).

Ultimate Fighting Championship (UFC) Heavyweight hurter Mark Hunt will be riding the pine for quite some time, after shattering the bones in his hand in the five-round main event bloodbath he had against Antonio Silva at last Friday night's (Dec. 6, 2013) mixed martial arts (MMA) event at the Brisbane Entertainment Centre in Queensland, Australia. 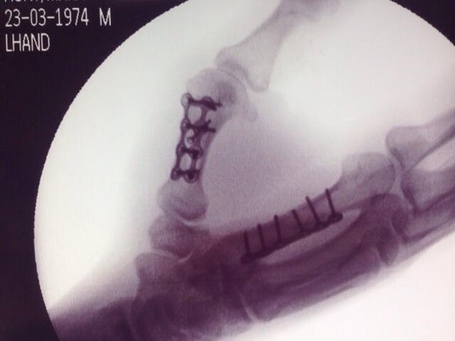 "The Super Samoan" has an entire gallery of hand repair pics on his official Facebook page here.

Hunt and Silva fought their asses off "down under" but had to settle for a majority draw, which is hard to believe considering how much punishment these two endured. How they were left standing is anyone's guess, but hopefully they can do it again -- and settle their score -- once both fighters get back to full health.