Take a look at how the bout was scored a majority draw...

If you missed the UFC Fight Night 33 main event between Ultimate Fighting Championship (UFC) Heavyweights Mark Hunt and Antonio Silva, I honestly feel bad for you. I feel bad that you missed out on seeing on of the heavyweight fights of all time, regardless of the combat sport. It was by far the best in the promotion's history.

For five rounds, "Big Foot" and "the Super Samoan" stood toe to toe and exchanged power punches. At times, both were severely hurt but neither gave an inch. It was a bout that illustrated what it means to have heart and was a perfect example of "leaving it all in the cage."

When the final bell sounded, both men were bloodied up and bruised. "Big Foot's" face was swollen from absorbing dozens of punches from Hunt. And Hunt had difficulty walking back to his corner as the Brazilian battered his legs with kicks.

The judges were unable to decide who won the fight, with the bout going down as a Majority Draw. Honestly, that was probably for the best. There was no loser in that fight. We all won. Check out the official scorecard below... 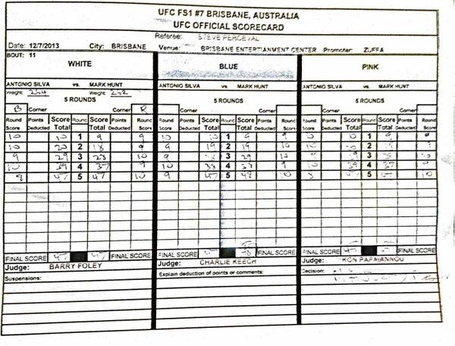 For complete UFC Fight Night 33 results and blow-by-blow coverage of all the night's action click here.