Do not be fooled by the lack of a first round finish. This was utter and complete domination.

There was a time, not all that long ago, that Miesha Tate was considered the bright shining future of women's mixed martial arts. She was hot like Gina Carano but better once she climbed inside the cage, and not a threat to bail off to Hollywood.

Rousey, a judo player with Olympic credentials and an armbar no one has been able to stop, blew through Tate in their first fight in Strikeforce in March 2012. The bout lasted less than one round and ended in submission like all "Rowdy" match-ups do. But, at the very least, Tate showed some flashes of potential.

She just needed one more crack at it to prove she could exploit the holes she found in Rousey's game.

Well, she got her chance in the co-main event of UFC 168: "Weidman vs. Silva 2" last night (Sat., Dec. 28, 2013) at the MGM Grand Garden Arena in Las Vegas, Nevada, and while she made it to the third round this time, she didn't fare much better than the first time out (watch highlights of the bout by clicking here).

That's being nice about it. The Fight Metric report shows how thoroughly Rousey dominated her in every aspect: 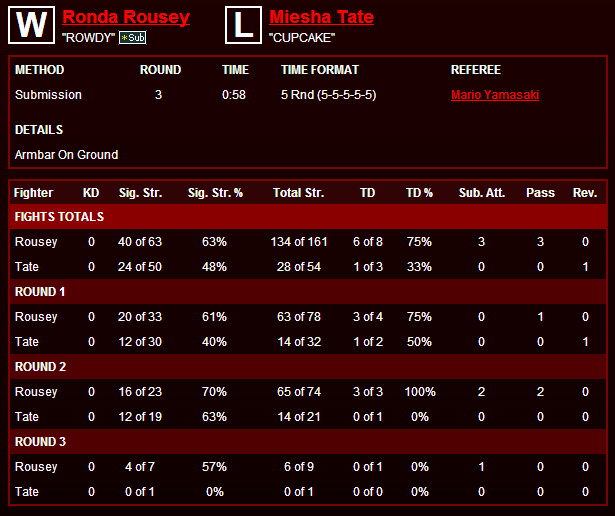 Rousey was better everywhere. She dressed Miesha down by out-striking her, taking her down harder and more often, passing her guard, transitioning to submission attempts, maintaining control, busting her open, and eventually completing an armbar for the win.

Tate was downright catatonic at the post-fight press conference. It wasn't just that she lost, it's that she was so thoroughly dominated for the second time in as many outings against a woman who insulted her in every way imaginable for the past two years.

Rousey talked big and performed bigger. Tate legitimately thought she had the tools and the right plan to unseat the cocky champion. She failed miserably and the statistics show just how bad it was.

To add even more insult to injury, Rousey wouldn't shake Tate's hand after the final horn. For the explanation on that click here. Oh, and "Rowdy" was paid an additional $150,000 in bonus money for her performance. Yeah.

On to the next one.

For everything you need to know on "Rousey vs. Tate 2" click here, and for complete UFC 168 results and blow-by-blow coverage of all the night's action click here.