Now that the dust has settled and the smoke has cleared in the wake of UFC 167, the SB Nation crew has tallied the votes and come up with the 10 best welterweight fighters in mixed martial arts (MMA) today. Have a look.

Well, this should surprise no one.

But thanks to a close call by the judges, "Bigg Rigg" is still number two.

Former middleweight Robbie Lawler has rocketed up the charts at the expense of Rory MacDonald, also at last weekend's "Sin City" extravaganza, while former top contender, Nick Diaz, falls off the charts, likely due to his inactivity (and a pair of losses don't help).

As a result of all the recent activity, the SB Nation rankings panel -- compiled by MMA Mania, MMA Fighting and Bloody Elbow -- recently reshuffled its list of top 170-pound MMA fighters for UFC and beyond. 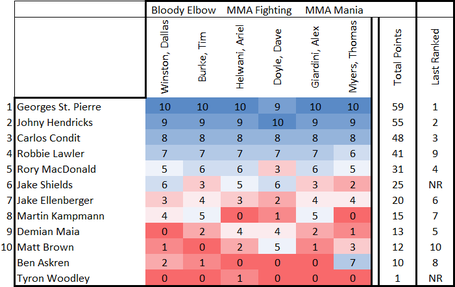 See how this list compares to the "official" UFC rankings here.

Expect this line-up to change before the year is out, as Carlos Condit and Matt Brown go to war at UFC on FOX 9 next month in Sacramento, California. Until then, we need some feedback from the peanut gallery.