The Cinderella story is over as Miesha Tate loses her bid to join Jon Jones on the cover of the next UFC video game from EA Sports (see it here).

Now you know how Ronda feels!

It was fun while it lasted. 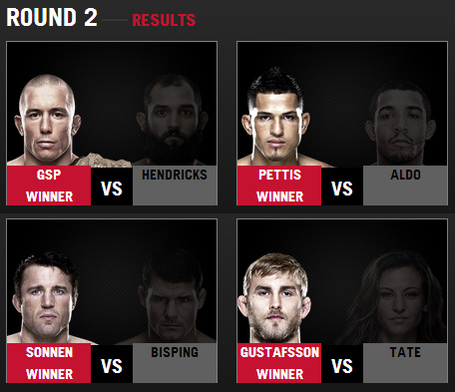 "Cupcake" advanced to the second round of the fan vote by upsetting UFC 168 opponent (and fellow TUF 18 coach) Ronda Rousey by way of come-from-behind victory in the opening frame (details). She was promptly paired up against "The Mauler" a few days later but alas, it was not meant to be.

But she's not the only one.

Anthony Pettis was able to overcome Jose Aldo, which is not without irony, as these two were expected to tangle at UFC 163 earlier this year in Brazil. On the other side of the bracket, art imitated life as Chael Sonnen whipped Michael Bisping -- just like he did at UFC on FOX 2 -- and Georges St-Pierre squeaked past Johny Hendricks.

"The American Gangster" moves on to face Gustafsson while "Rush" tries to overcome "Showtime." Cast your next ballot on Nov. 25, 2013 by clicking here. Can the towering Swede once again find himself sharing the spotlight with "Bones?"

Or will Sonnen's popularity prevail?