Sometimes, controversial and outrageous split decision happens in mixed martial arts (MMA). And maybe that's not such a terrible thing in the grand scheme of things.

Share All sharing options for: Searching for silver lining(s) in Georges St-Pierre vs Johny Hendricks controversial split decision at UFC 167

Last night (Sat., Nov. 16, 2013) at UFC 167 from MGM Grand Garden Arena in Las Vegas, Nevada, Johny Hendricks didn't really shock the world, but what astonished everyone was the end result.

Many mixed martial arts (MMA) fans gave Hendricks a good chance to upset long-time Welterweight deity Georges St-Pierre -- the closing odds had him at only a +175 under dog on most sites. To put that line in perspective, it was the lowest odds that there have been on a St. Pierre fight since B.J. Penn in 2009.

Therefore, it wasn't a shock that "Bigg Rigg" had a fantastic fight (watch full video highlights here) against "Rush" It was somewhat shocking to most of the MMA community that "Rush" had his hand raised at the end of what was a tough, competitive fight.

While the first couple of rounds were close -- and obviously the first round was the deciding factor on the scorecards -- nearly every media member scored it for Hendricks (myself included) as did many, many fighters and fans.

In case MMADecisions.com is still overwhelmed from the traffic, here is a screencap of how numerous live-bloggers scored it. Keep in mind, most of us also got that other controversial title fight, Jon Jones vs. Alexander Gustafsson at UFC 165, scored correctly. 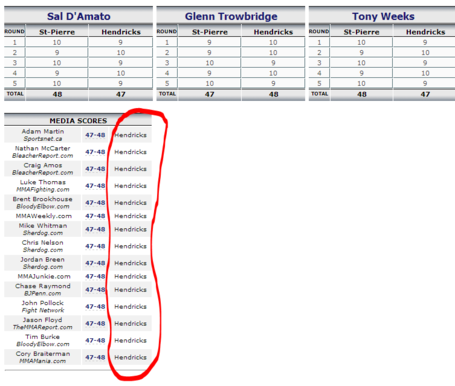 Looking at the live-blogging of the other SBNation sites, both Luke Thomas at MMAFighting and Brent Brookhouse at BloodyElbow scored it the same way I did with rounds one, two and four going to the American. For what it's worth, FightMetric's scoring (which is an admittedly inaccurate science) seems to agree with us and on the same rounds.

But, the people who are calling this a robbery? There's been a lot worse in MMA. And there's worse in boxing on almost a monthly basis, which doesn't make this result right and/or justifiable.

Just saying, this isn't exact, but the aforementioned FightMetric report is a good overall gauge of what happened, highlighting that the first two rounds were both very close. Quite frankly, I thought the first round was an easy Hendrix one, and it has that as the closer of the two.

It just underscores the cold hard reality that judging in combat sports is subjective and open to interpretation. Unfortunately, among the minority of people who didn't think that Hendricks won were two judges, Tony Weeks and Sal D'Amato, who were sitting ringside last night.

It's a shame, too, because it was a hell of a fight. And for the first time ever in the long, illustrious career of Georges "Rush" St-Pierre, someone stood toe-to-toe with the long-time pound-for-pound great and matched him in all aspects of MMA for five rounds.

Matt Serra caught him, Matt Hughes took it to him when he was younger, but neither of those fights heard a final bell ring. Hendricks wrestled, boxed and kneed him, matching one of the best this sport has ever had and all anyone is talking about is a dubious judges call.

I plan on re-watching that fight and enjoying two athletes at the pinnacle of this sport fire back-and-forth for 25 minutes. In the end, this is the reason I watch UFC. When I watch title fights in this company, I'm watching the very best fighters in this sport attempt to topple each other in a one-on-one game of human chess.

They have almost no holes in their game and are constantly evolving and changing.

This fight was easily one of the Top 10 fights of the year in a year full of outstanding MMA, and regardless of the outcome, it should be celebrated as such. For the record, off the top of my head, I'd put it at No. 6 in 2013 to date, but that's neither here nor there.

It's a shame that St. Pierre will take some time off for his mysterious, undisclosed reasons because an instant rematch would showcase two of the very best unarmed fighting humans on the planet displaying their skills. Instead, one of them is bowing out and questions abound about what's next.

Perhaps that uncertainty -- along with potential corrective measures Nevada State Athletic Comission (NSAC) might take moving forward -- is the silver lining in all of this, making the rematch that much better if and when it is booked.

And all those wrongful others that hopefully never follow.

For more on the controversial fight between Georges St-Pierre vs. Johny Hendricks click here, here and here.