Last night (Oct. 19, 2013) at UFC 166, Sarah Kaufman learned a valuable lesson: never leave it to the judges. She came up short in her bout with Jessica Eye, losing a close split decision at Toyota Center in Houston, Texas.

Jessica Eye picked up a split decision over Sarah Kaufman last night (Oct. 19, 2013) at the Toyota Center in Houston, TX at UFC 166. Eye has spent much of her mixed martial arts (MMA) career fighting at flyweight, but for her Ultimate Fighting Championship (UFC) debut, she fought at bantamweight.

The bout was another example of great action in the women's division, with Eye showing no fear when engaging the much larger Kaufman on the feet. She was able to use her speed to land punches that eventually caused a ton of swelling under Kaufman's left eye.

For those watching the bout, it was clear that Eye took the first round and Kaufman came to life in the third to take it. The only round in question was the extremely close second. Bruce Buffer read the scores and Eye picked up her first win in her promotional debut.

The problem is that there's a reason to take issue with one of the scorecards. Judge Ruben Najera scored the third in favor of Eye, the one round that without question should have gone Kaufman's way. This was Najera's first time judging a major MMA event. He also scored the Tim Boetsch/C.B. Dollaway bout 30-26 in favor of the "Barbarian."

Fight Metic provides a round by round breakdown of the striking exchanges. 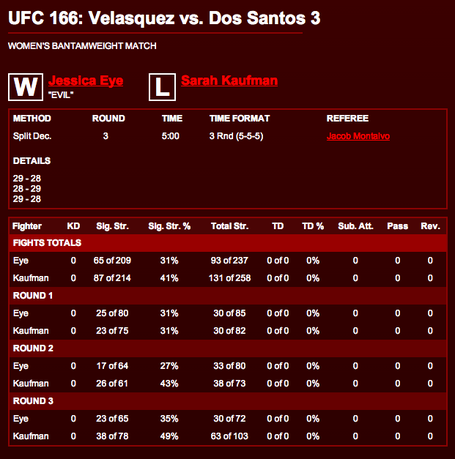 Awarding the third to Eye is completely indefensible. She was outworked and nearly put to sleep when Kaufman finally started to land from range. While punch stats don't tell the whole story, they at least provide a little bit of insight. And while the second round was close, Kaufman clearly beat up Eye in the third.

She landed twice as many strikes and had Eye rocked. Under the Unified Rules of MMA, there's just no way to explain how Eye could have been award the round.

The biggest takeaway is that Sarah Kaufman was absolutely robbed last night. And the person she has to blame is not herself, it's Judge Ruben Najera, a man who had absolutely no business sitting cage side scoring the fight.