Rousimar Palhares responds to UFC cut: 'I never meant to hurt anyone'

Following all the news that came out today regarding Rousimar Palhares and his history of deliberately trying to hurt his opponents, "Toquinho" took to Twitter to defend himself.

Share All sharing options for: Rousimar Palhares responds to UFC cut: 'I never meant to hurt anyone'

For more on the decision to cut "Toquinho" click here.

Palhares's unfortunate choice to not release his submission hold on Mike Pierce -- despite furious taps from the American fighter and the referee's physical intervention (watch it here) -- has snowballed from Dana White saying there would be "additional punishment" to his unceremonious ouster.

For his part, Palhares has maintained his innocence throughout the ordeal even though this is not the first rodeo for the troubled Middleweight. In fact, Palhares briefly took to Twitter this afternoon to share his side of the story.

His message, which has since been deleted: 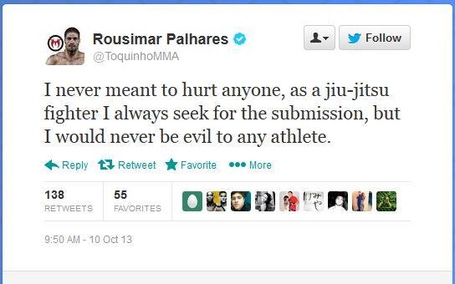 Perhaps Palhares is indeed sincere; however, actions in mixed martial arts (MMA) typically speak louder than words. For whatever reason, he is a danger to his opponents after the action is stopped. And the promotion is clearly no longer interested in employing such a puzzling -- and unpredictable -- liability.

The good news is that it doesn't appear Pierce suffered any major structural damage. And the even better news is that he -- and the rest of the Welterweight division -- will no longer have to be concerned about sustaining senseless, and avoidable, injuries because one man can't get the rules right.