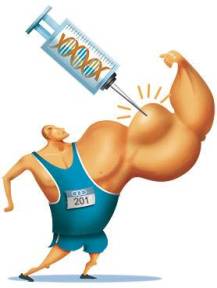 Mixed martial arts (MMA) has had its fair share of controversies, but few have become polarizing topics to the extent of testosterone replacement therapy. TRT, as it is more commonly referred to, has become more and more prevalent with fighters in the last couple of years. Skepticism has risen, with fighters and fans alike raising their voices about their stance against its use within the sport.

Recently, we've been surprised with reports of fighters like Forrest Griffin and Frank Mir having received therapeutic use exemptions (TUEs) heading into their most recent fights. Other long time fighters, such as Dan Henderson, have been on TRT for their last few fights. Even Todd Duffee, only 26 years of age, has received a TUE.

So what can we base this sudden growth of TRT in MMA on? Is it a true medical advancement, a loophole for cheating, or an ineffective treatment receiving a marketing push? A recent article coming from NBC News seems to suggest the latter:

But the latest marketing push by drugmakers is for easy-to-use gels and patches that are aimed at a much broader population of otherwise healthy older men with low testosterone, or androgen deficiency. The condition is associated with a broad range of unpleasant symptoms ranging from insomnia to depression to erectile dysfunction. Drug companies peg this group at about 15 million American men, though federal scientists do not use such estimates.

[...] Male testosterone is mainly produced in the testes and affects muscle mass, sperm production and various sexual characteristics. The hormone can easily be checked with a blood test, but doctors can't agree on what constitutes a low reading in older men. Typical testosterone levels for younger men range between 300 and 1,000 nanograms per deciliter, but once levels begin dropping there is little consensus on what makes a "normal number."

Some doctors believe testosterone levels below 300 lead to sexual dysfunction in older men, but the rule does not cover all cases. A 2010 study by researchers at the University of Manchester and other European institutions found that 25 percent of men with testosterone levels above that threshold had the same sexual problems used to diagnose low testosterone. Adding to the ambiguity is that testosterone levels change by the hour, so a man who takes a blood test for testosterone in the morning may get a completely different reading when tested in the afternoon.

With such ambiguity among the scientists on the cutting edge, who's to say that we, the general public, should even have an opinion on this? Then again, who's to say this should be allowed for use in regular people (let alone fighters) when it's possible we're not even sure of what constitutes the dreaded "low-T" or what it may affect?

It is interesting to note that as this problem has grown in MMA, it has been growing in the general public in a nearly parallel way. Here's what the same article referenced above had to say about the rise of testosterone therapy by the numbers:

Baby boomers are living longer and looking for ways to deal with the infirmities of old age: Life expectancy in the U.S. today is 78 years, up from 69 years a half-century ago. And companies have stepped up their marketing to the older crowd: Spending on print and television ads promoting testosterone by firms like Abbott and Eli Lilly has risen more than 170 percent in the last three years to more than $14 million in 2011, according to advertising tracker Kantar Media.

Clearly, there's a huge push going into this "new advancement." There is money to be made, regardless of the positives and negatives this treatment may have. For every man saying they feel like they're 20, there may be another who has nothing to say, or possibly bad things to say.

In MMA, we've only seen the positives, with fighters such as Quinton Jackson saying it gives him the vigor and strength he had early in his career. Whether or not that should be acceptable is a different story, but so far, most fighters on the treatment have given some stellar reviews. Of course, some have remained quiet, as neither Mir nor Griffin have spoken much on the topic since news broke of their respective usage, and Nate Marquardt had little to say when he stopped receiving the treatment.

To add to the point above about the possible ineffectiveness of TRT, here is yet another quote from NBC News' article:

Adding to the confusion over what defines "low testosterone," there's not much understanding of whether testosterone replacement therapy actually improves men's symptoms. Evidence of the benefits of testosterone is mixed, and the potential health risks are serious. The largest study conducted to date, a 2008 trial involving 230 patients in the Netherlands, found no improvement in muscle strength, cognitive thinking, bone density or overall quality of life among men taking testosterone. Muscle mass increased 1.2 percent, but not enough to improve physical mobility.

With insight like this, it's difficult to say what effect TRT actually has on MMA. If it can be so ineffective, what's the point of even taking it? What's the point of calling it cheating? Truth be told, there is very little known about it, even to some experts. That raises even more questions, such as how this can even be ethical as a prescription, or how it may only work for a select group of people. Of course, fighters like Tito Ortiz will lash out if it's used against him, and Michael Bisping will speak up, regardless of what he knows on the subject.

TRT in itself may just hold more risk than reward. It is known that use of TRT can cause increased rates of heart attacks and possibly prostate cancer. There's even more controversy if you dig into the disputes of what actually causes a need for synthetic testosterone.

Some fans may cry out that that all PEDs should be legalized, as they're already in use under wraps. But then what does that create, an arms race of pseudo-human battering machines? Others will cry out against TRT, but can't cite any significant evidence proving its unfairness. When it comes down to it, I'd have to agree with the latter side, being that whatever it may do, it's not fair to have the experience of a veteran with the body of a fighter in their prime, as that is the desired effect among fighters.

There have been doctors on both sides of the argument, some qualified, some not. I have yet to see conclusive evidence proving anything about the true effects of TRT, so it's difficult to grasp what we're dealing with. Is it truly a helpful treatment, or is it all a hoax being promoted to build up money for drug companies?

We just don't have any way of knowing.

All in all, we see that skeptics of testosterone replacement have a very good case. At the same time, so little is known about the actual effects of testosterone replacement therapy on the human body. In my humble opinion, these kinds of drugs should not be used if so little is known about them, much less in such a competitive and traumatic sport as MMA.