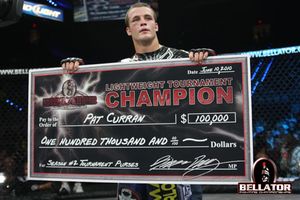 About a week and a half before his first scheduled Bellator featherweight title defense, Pat Curran suffered a "freak accident" while sparring, and it put his title fight on hold. His sparring partner delivered a perfectly placed hook, which broke Curran's orbital bone, and the injury derailed him for the rest of the year.

Curran hopes to be getting back into the cage sooner than later, and is looking at an early 2013 return. Of course, he'll be needing a doctor's clearance, so his return hinges mostly on that. MMA Junkie talked to Curran, here's what he had to say:

I'm going to try to get back in as soon as possible. I don't like taking too much time off. I'm a very active fighter, and I've already had enough delay. I really want to get this fight going and I'm really excited about it.

Curran then detailed what led to this freak injury, rarely heard of from sparring sessions:

I was sparring with this guy for six or seven weeks leading up to the fight, and I don't know - it was just a freak accident. He pivoted to his left and threw a right hook. I saw footage of it, and I ducked my head right into it - right on the sweet spot. I've never had this happen before, and I knew immediately something was wrong. My eye went blind. I couldn't see. My nose started bleeding - and he didn't even hit me in the nose. It took 20 or 30 minutes until my vision completely came back. I went right to the ER from there and got a CT scan, and they said it was cracked.

Such an injury is truly a freak occurrence, and unfortunately it led to the cancellation of Curran's title bout at Bellator 73 with Patricio "Pitbull" Freire for the Bellator featherweight title. Curran recently took the featherweight title after a violent finish of Joe Warren at their fight in April. Pat will be able to get back into the gym and return to training by October, so he should be ready for a return in early 2013, which is what he wants.