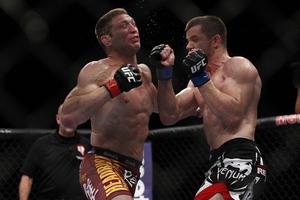 Jason Miller is widely known by his nickname, "Mayhem," and it could not be more fitting.

Last month, the former Ultimate Fighting Championship (UFC) and Strikeforce middleweight went on a Twitter rant against UFC President Dana White while getting overly personal in the process. This was followed up by one of the most bizarre happenings we have yet to see in the world of mixed martial arts (MMA), as Miller broke into a church and ran amok with a fire extinguisher, later being found naked on the second floor of the building.

While many that knew about the incident were forgiving, he still had to face punishment for his actions. Today (Sept. 5, 2012), that punishment was decided in court. MMA Junkie has the story:

The Orange County (Calif.) District Attorney today charged Jason "Mayhem" Miller with a misdemeanor count of vandalism for allegedly breaking into a church. Miller faces probation or up to one year in jail, OC district attorney spokesperson Farrah Emami today told MMAjunkie.com. Miller's arraignment is scheduled for Nov. 21 in Orange County Superior Court, were he will either enter a plea of guilty or not guilty.

The complaint against Miller, which was filed today, detailed what he defaced, which added up to $400 in property. He sprayed a fire extinguisher all over the first and second floors of the Mission Hills Baptist Church, and also broke many things in his wake.

If Miller chooses to plead not guilty, a pretrial hearing will be held at a later date.