There aren't many people in the MMA world that can tell you much about the UFC's fast rising Featherweight, Max "Blessed" Holloway, but in Hawai'i, everybody knows Max. This is the story of his rise from a garage on the west side of the island of O'ahu, all the way to the UFC. 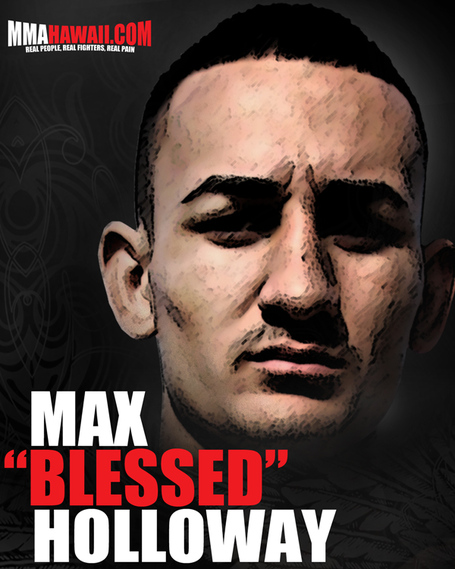 In the fighting world, there are a lot of stories. And it just so happens that a lot of those stories sound exactly the same. So the sob story will be spared on this occasion. Max Holloway was not troubled child. In fact, he managed to live in one of the most dangerous cities in Hawai'i, and stay out of trouble. There was never the desire to fight in the street, nor to make any other trouble. He just wanted to become a fighter.

Growing up, he was always a little bit smaller than the others. He was also a little more quiet. Starting with a little team called God's Army, Max Holloway began to work on his fighting skills. He knew early on that he was not as athletically gifted as many people, and that he would have to put in the extra effort, so he did. Every single chance that he got, Holloway was engaging in intense training sessions with some of the most talented strikers that the island of O'ahu had to offer.

Though just a humble team who practiced in a garage, God's Army began to make their name known in the Hawaii MMA world. Members like Colin Mackenzie, Jon Barnard, Ben Santiago, Johnavan Vistante, Kona Ke, and Max Holloway started to put in hard work through every fighting outlet they could. It was hard for any promoter to deny their work ethic, and their ability to bring the fight. Max was a member of a rag-tag team of fighters who really shook the idea of a traditional gym.

As Holloway sharpened his skills in the garage, his team began to gain steam. Members of God's Army started to take titles. And it wouldn't be long before Holloway would continue their tradition. Always the underdog, Holloway would be thrown tot the wolves on almost every single occasion. Little did anybody know, Holloway turned out a wolf in sheep's clothing. Coming out on top on nearly every single occasion.

His striking ability was hard to deny. After all, he was in a lions den as far as his team went. But the most amazing attribute to Holloway's fighting style, from the beginning of his career even until now, has always been his heart. No matter how many times the young buck from the west side was counted out, he always carried a confident smile into the cage with him. No matter how many hard shots he took, he always learned to dodge the next one.

Fight after fight, the fans would count Holloway out. They made arguments of his size, his team, his training, his skills, and even his age. But Holloway stuck through it all and made believers out of nearly everyone in the islands. He traveled to other islands and took on their top talent, scoring a TKO to gain BJ Penn's "Just Scrap" title. He took on regional veterans like Eddie Rincon, and all around veterans like Harris Sarmiento. And in every losing situation, he came home with a win.

It was no surprise to many that Holloway received the call up to the big leagues. Many had been campaigning for it, but few thought it would come so quickly. With only four pro fights under his belt, it was understandable that many thought him to be a youngster in the game. But in all actuality, Holloway had been fighting on nearly every card for years as an amateur, and has just as many, if not more fights, than the average UFC fighter. And likely the most fights as underdog.

The big announcement of his call to the UFC came on the same day as the birth of his son, Rush. Max had finally arrived. And through it all he had little bad to say of those who doubted him. He actually enjoys their input. In an article for MMA Hawaii Magazine, Max even said that he enjoys the comments of the doubters because they let him know exactly what he needs to work on. The more they hate, the more they motivate.

In his losing effort to Dustin Poirier on February 4, at UFC 143, Holloway managed to do something that nobody at the time had managed to do. . . FORCE Dustin Poirier to take the fight to the ground. Max took his stand up game and he threw it all at Poirier. In a post fight interview, Dustin even admitted to being momentarily flash KO'd by a flying knee. Though he was taken to the ground and promptly submitted, Holloway impressed nearly everyone who witnessed him. So when he throttled Pat Schilling in a three round affair, not many were shocked.

Shucking off takedown after takedown in his second UFC appearance, it was obvious that Holloway had been putting in work. And even in his third fight, against Justin Lawrence, Holloway showcased a skill that is lightly used in the Octagon, body shots.

Now with a 2-1 record in the UFC, and a son who is nearly a year old, Holloway is far different from that kid he once was when he began the fighting game, but he is still the beast he always was in the cage. There is no opponent that will intimidate him or break his will. One by one Max is accomplishing goals on his life's list, and the next in line is to get the UFC title. And as a 20 year old fighter with 3 outstanding fights in the world's largest MMA promotion, it doesn't seem too far fetched.

He is a man who fights on, no matter the cost. He is a boy who is following, and achieving his dreams. He is a husband. He is a father. He is one of the most unique fighters in the UFC. Max Holloway is truly "Blessed".