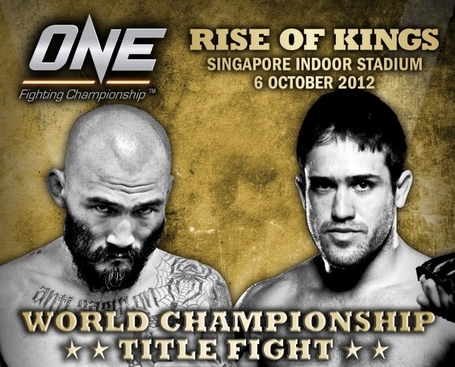 ONE Fighting Championship today released the full fight card for October 6th and there were a few unexpected names on it. ONE FC: 'Rise of Kings' will be headlined by Zorobabel Moreira vs Kotetsu Boku which is one of three title fights.

The two big names who had not previously been announced as having signed with ONE FC are Yusup Saadulaev and Ryo Kawamura. The Russian is coming off a huge KO win over Hideo Tokoro which came courtesy of a slam and with a 9-0-1 record it is surprising that the UFC never made a move for him.

Kawamura is the current King of Pancrase Middleweight Champion and also held the light heavyweight title in the same organization. He has a 15-6-4 record and has won his last three fights, the most recent being a soccer kick KO of Road FC Middleweight Grand Prix winner Shungo Oyama.

Yusup Saadulaev is taking on 9-2 URCC Flyweight Champion Kevin Belingon on what will be the pick of the three Bantamweight Grand Prix quarter finals currently announced. Kawamura is meeting Melvin Manhoef in what promises to be an explosive contest between two fighters who are both knock out artists with limited ground games.

Another fight which should be very entertaining is the main event between Zorobabel Moreira and Kotetsu Boku, with the ONE FC lightweight belt on the line for the winner. The Japanese fighter always looks to land bombs and the Brazilian will need to have his wits about him if he wants to become the first man to ever win four ONE FC fights.

Moreira's Evolve MMA team mate Leando Issa is also fighting for a title and will be taking on Korean Soo Chul Kim. The other title fight is also set to be a rematch with featherweight Bae Young Kwon likely to be confirmed as Honorio Banario's opponent any day now.

Shinya Aoki's ONE FC debut has been moved down the card and he will now be taking on French fighter Arnaud Lepont before the first of the three title fights. The other two matches revealed this morning are mainly of local interest as Singaporean Radeem Rahman takes on Malaysia's Gianni Subba and Singapore based American Mitch Chilson goes up against Indonesian Ngabdi Mulyadi.

ONE FC: Rise of the Kings will be he streamed live for $9.99 USD and will also be available on pay-per-view (PPV) in the US for the first time.