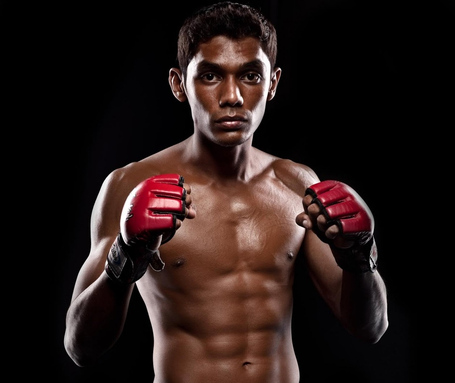 Radeem Rahman will fight for only the second time in his mixed martial arts (MMA) career on October 6, 2012 and there will be a stadium full of Singaporeans cheering for him. Any other fighter would find the prospect of dealing with so much expectation intimidating but the 25 year old is used to it.

He made his debut in front of 7,000 fans at the Singapore Indoor Stadium last September and is already accustomed to being at the eye of a media storm and carrying the hopes of an entire nation on his shoulders. Rahman has had to wait over a year to fight for the second time but already feels at home inside the ONE FC cage.

"I know there will be more people there this time because the entire stadium is being opened up but I enjoy being inside the cage and hearing so much noise from the crowd. If you train right then you have nothing to fear about fighting and the training at Evolve MMA is always harder than the fight."

In the intervening months a couple of other Singaporean fighters have come and gone. Rahman's Evolve MMA team mate Nicole Chua made an impressive debut but there is a shortage of female fighters at her weight. Kim Hock also started well but suffered a devastating loss in his second fight when Malaysian Peter Davis broke his jaw in two different places.

MMA has taken Singapore by storm since Asia's biggest MMA organization, ONE FC, set up there last year. There have already been two sold out shows at the Singapore Indoor Stadium but while fans will buy tickets to watch famous fighters of any nationality the desire for a homegrown hero to get behind is palpable.

That leaves Rahman with an enormous burden of expectation but it is something he says he is very comfortable with,

"Because it is the same for all my team mates it feels normal for me. Every time Shinya Aoki fights he has to deal with the same thing and fighters like Eddie Ng, Leandro Issa and Zorobabel Moreira are becoming very popular now, it is the same for everyone on the Evolve MMA Fight Team and having such experienced team mates definitely makes the whole experience easier."

He was billed as being the underdog when he took on Indian fighter Susovan Ghosh at ONE FC: 'Champion vs Champion' because, unlike his opponent who had a number of amateur fights under his belt, Rahman had never competed at MMA at any level.

The Singaporean showed no signs of stage fright as he ran through his opponent in a matter of minutes with a Muay Thai onslaught that the Indian fighter had no answer for. Afterwards people suggested it had been an easy night's work but but Rahman disagrees,

"If I made it look easy that is only because I trained very hard, the training was not easy. Everyone on the Evolve MMA Fight Team has more experience than me, many of them are world champions in Muay Thai, BJJ, boxing or MMA so I am never the best at anything but in that situation you have to learn fast or you will not survive."

This time around he is reportedly set for a more stern examination and, although he would not say with who, Rahman is preparing for what he thinks will be a war,

"I know he has a background in wrestling and I think he won a gold medal at one of the big grappling competitions in the US, they tell me his standup is good too. I know it will not be an easy fight but I am working my BJJ with Mundials winners, my Muay Thai with Lumpinee Champions and my takedowns and takedown defence with NCAA and Olympic wrestlers. I know this will be a big test for me but whatever situation happens on October 6th I will have already experienced in training and I will be ready for it."

Rahman would not reveal the identity of his opponent but believes there will be an announcement sometime this week. The card will feature his Evolve MMA team mate Shinya Aoki as well as the return of Melvin Manhoef but the biggest cheer of the night will inevitably be reserved for the 26 year old Singaporean.

Some fighters would struggle to step straight into the limelight without any prior experience of professional MMA but for Rahman there is no downside,

"The whole experience of fighting the first time was amazing and hearing the crowd when I walked into the cage really pumped me up. Everyone wanted to know if I was nervous but I just felt excited and determined to succeed, if you prepare properly there is nothing to be nervous about and I love fighting and am lucky that thanks to ONE FC I get to do it in front of so many fans."

ONE FC: Rise of the Kings will be headlined by a bout between Shinya Aoki and Arnaud Lepont. The online stream will be $10 USD and it will also be available on pay-per-view (PPV) in the US for the first time.