Any modern mixed martial arts (MMA) fan knows the Ultimate Fighting Championship (UFC) is plagued with more injuries than ever before, but the injury bug has never been more pronounced than in 2012.

To wit: there were more cancelled title fights this year than the entire previous five years combined.

Although some of these match-ups may eventually happen one day, 2012 features no fewer than five cancelled championship bouts. In fact, if you go back a full calender year, that number jumps to six. 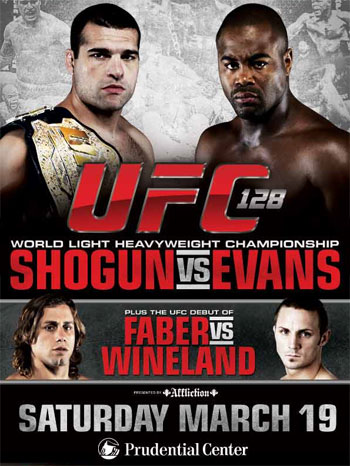 Rua hadn't fought since May 8, 2010, when he landed a brutal knockout of Lyoto Machida in his rubber match from a controversial decision loss at UFC 104. Following that victory, Rua went under the knife to reconstruct his knees, which have plagued him in recent years.

When "Shogun" vs Evans was announced there was a fair amount of anticipation, although there was also some doubt about how Rua would handle the ring rust. Evans was also suffering from a long layoff, having defeated Rampage Jackson at UFC 114 on May 29, so both fighters hadn't seen the inside of a cage for a while. Evans was on a two-fight winning streak after losing to Machida back at UFC 98.

Alas, this fight wasn't to be. Evans announced an injury to his knee following Jon Jones' victory over Ryan Bader at UFC 126. Quinton Jackson was given the opportunity to fight Shogun instead, which is another interesting rematch, but backed out after saying he couldn't get ready for the Brazilian on only four weeks notice. He was also grossly overweight, and said he'd need to cut from 250 to 205 pounds in that time.

Knees are a bit of a theme in UFC injuries. "Rampage" was scheduled to get that lost rematch against "Shogun" sometime in October, but had double knee surgery instead and will soon face Glover Teixeira.

Jon Jones stepped in to replace Evans and the rest, as they say, is history.

Given that St. Pierre had cleaned out the welterweight division -- and then some -- it could be said the Diaz vs. St. Pierre match-up was one of the most anticipated events in the history of the promotion. Not only was Diaz undefeated since 2007 and on a 10-fight win streak, he brought an attitude to the cage that could only be described as unique. The intangibles made this a fight everybody wanted to see whether "GSP" could handle.

Unfortunately, Diaz didn't really like the media game, and after a second no-show to a press conference, he was pulled from the card and replaced by Carlos Condit. "Rush" was later injured and the main event was switched to a memorable beatdown of B.J. Penn at the hands of none other than Diaz. Because of that performance, the unreliable Dana White went back on his word and rescheduled the more fan-frenzied St. Pierre vs. Diaz at UFC 143.

But "GSP" re-injured his knee, leading to the disappointing running game played by Condit at UFC 143. Regardless of the outcome, Diaz tested positive for marijuana metabolites in the post-fight drug test and was suspended for a year by the Nevada State Athletic Commission (NSAC).

Although St. Pierre is set to fight Condit for the welterweight championship in Montreal on Nov.17 at UFC 154, the fight has nowhere near the excitement of the Diaz fight and fans continue to clamor for the "champion vs champion" unification bout, which was really the only reason Diaz left Strikeforce in the first place. 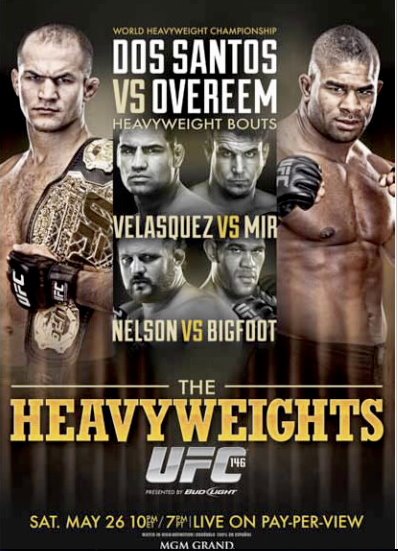 After Alistair Overeem jumped from Strikeforce's Heavyweight division to the UFC, like Nick Diaz he had a tune-up fight against the highly overrated Brock Lesnar. After winning easily on the New Year's Eve card, he was scheduled for the title fight against Junior dos Santos on a stacked all-heavyweights main card.

But on April 4, the notorious killjoys struck again, when the NSAC announced Overeem's pre-fight testosterone to epitestosterone ratio was an inhuman 14:1. This resulted in a considerable shakeup that slotted Frank Mir in the title fight instead, and ruined a very anticipated fight.

"The Reem" is scheduled to return this December and there's rumor he might jump the arguably more deserving Cain Velasquez. But given the fact Junior demolished Cain in a minute already, the fans really want to see whether Mr. Horse Meat can give "Cigano" his first competitive fight inside the Octagon. 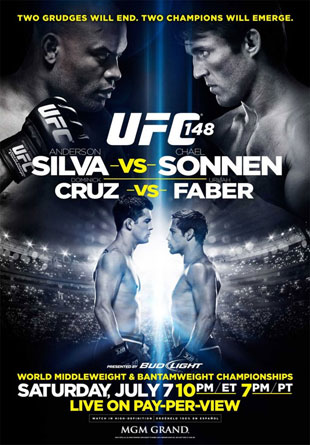 I don't think anybody really cared when Dominick tore his ACL, other than the fact that it meant another division would be crowded at the top waiting for the champion to return. After Cruz handled Faber at UFC 132 by unanimous decision (50-45, 49-46, 48-47), it was difficult to understand why anyone would want to watch Faber fail again.

But that injury probably worked out, as it set up Renan Barao vs. Urijah Faber at UFC 149, putting the Brazilian fighter in a potential title fight against the Dominator when he returns. 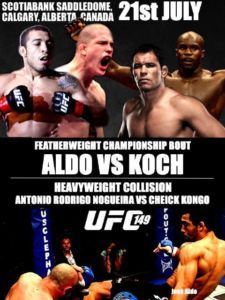 I'm not sure if that was the official UFC poster, since this match-up didn't last too long. Jose Aldo, after a series of injuries and false rumors, was finally set to defend his post-Chad Mendes massacre against Erik Koch. But on June 9, Aldo announced another injury, re-scheduling Barao vs. Faber in the main event instead. This was another weak card that was almost a prelude to UFC 151, with Tim Boetsch vs Hector Lombard in his UFC debut making for a relatively weak co-main event.

UFC 149 is probably the one of the worst Zuffa events ever put on, and even Dana White compared it to UFC 33 in the post-fight press conference. Could Aldo vs Koch have saved it? Doubtful. The fight was rescheduled for UFC 153, but then Koch announced on Aug. 31 he was injured, setting up a highly anticipated super fight between Frankie Edgar and Aldo Oct. 13 in Rio de Janeiro, Brazil.

We don't need to rehash this one again. Suffice it to say, Dan Henderson may have lost out on his title fight for longer than first imagined if Jones isn't ready right away after his bout against Vitor Belfort at UFC 152 on Sept. 22. Lyoto Machida may also jump in front of him.

Hopefully by that time we'll see the emergence of a new contender for Jones, such as Teixeira or Gustafsson. Then again, Belfort might get the miracle knockout.

So, with five title fight cancellations in one year, what's Zuffa doing wrong? Or if it's not the organization's fault then what's with all the injuries? Are fighters pushing too hard? Or are they under too much pressure to push to injury?

Why can't we ever count on a main event that's booked actually happening anymore?