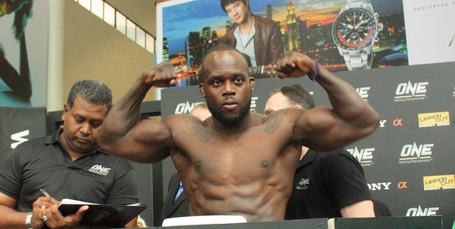 Melvin Manhoef registered his first win since 2009 when he defeated Jae Young Kim by split decision in the main event at Road FC 9 tonight. The event was supposed to be streamed live on sherdog but will now be available as a VOD later tonight.

The best place to go for a roundup of the action is MMA in Asia and it sounds like Kim exhibited an iron jaw and did well to stay standing in the face of a Manhoef onslaught and the Korean did enough to make the contest sufficiently close for it to come down to a split decision.

Another fighter who could make a convincing argument for being the best pound for pound striker in all of MMA, Vuyisile Colossa, was in action and it was a much shorter night's work for the South African Muay Thai champion.

He progressed to the semi finals of the Road FC Lightweight Tournament courtesy of a first round TKO victory over another stand up specialist, Seok Mo Kim. Colossa will be joined by three very strong fighters in the form of Japan's Takasuke Kume and Korean pair Yui Chul Nam andYong Jae Lee.

Japanese veteran Ikuhisa Minowa registered the 38th submission win of his career when he caught Jin Soo Yuk in a Kimura. The semi finals and final of the Lightweight Grand Prix are likely to take place at Road FC 10 later this year.