HBO, Top Rank and DiBella Entertainment kicked off its final press conference earlier today (Sept. 12, 2012) from the Encore Theater at the Wynn Hotel and Casino in Las Vegas, Nevada, featuring one last opportunity for Julio Cesar Chavez Jr. and Sergio Martinez to square off before Friday night's weigh ins.

They did not disappoint.

The headliners for this weekend's blockbuster pay-per-view (PPV) from the Thomas & Mack Center jawed at one another, as expected, but it was the supporting players who did a majority of the heavy lifting. Most notably, was pugilistic patriarch Julio Cesar Chavez Sr., who lambasted "Maravilla" for "invoking the devil" during his pre-fight hype and promised the Argentinian would "eat all the (expletive) he's been talking" come fight night.

Now we know where Junior learned how to talk the talk.

But can he walk the walk? Martinez went as far as to say he would beat Chavez Jr. "for the Mexican fans who support him," which understandably drew its share of laughs, but he also promised there would be nothing funny about the "painful" punishment he aims to deliver on Saturday night.

Quotes and photos after the jump. 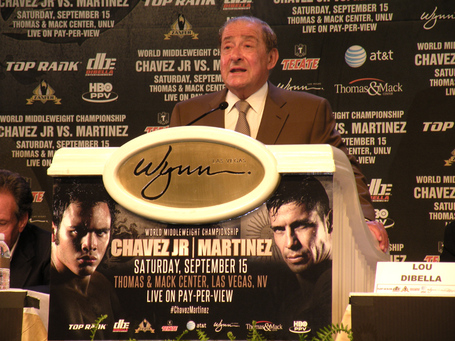 "If there's one thing that has been missed, it's putting this fight in its historical perspective. Today, I ran into people I hadn't seen since the 1970s, when I was promoting fights for Carlos Monzon. And I realized how significant and important major middleweight championship matches have been in the history of boxing. That's why when you talk about UFC, they don't have the history and the background that we in boxing have... And believe me -- believe me -- this fight on Saturday night at the Thomas & Mack (Center) between Julio Cesar Chavez Jr. and Sergio Martinez will go into the annals of the great, significant middleweight championships in history." 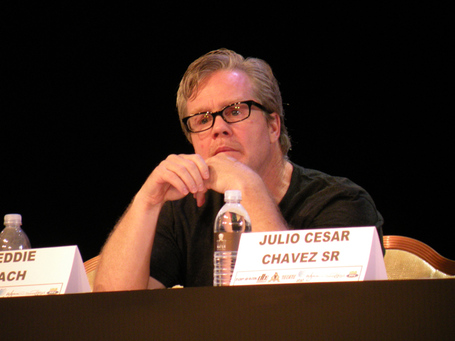 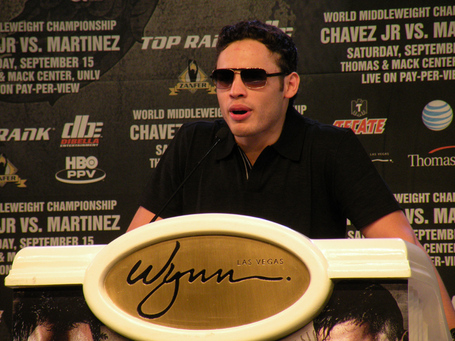 "I'm very happy that the fight is getting very close. Martinez is a liar. Barker and Macklin were not the best challengers. They were picked by his promoter."

"On 24/7, I saw one thing. He said it was very difficult to keep Kelly Pavlik off of him. This Saturday he's going to have me in front of him and all over him." 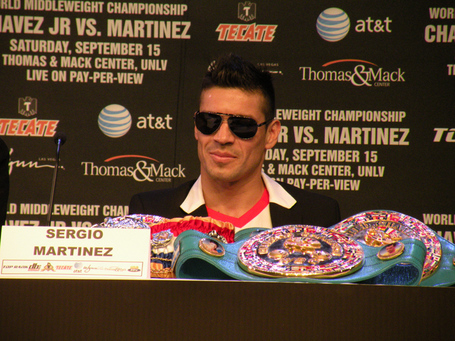 "This is a great fight, and I'm ready for this one. I've prepared myself for this one. I trained a long time dancing because I don't need much more than that to beat Chavez Jr up. This is good enough to break his face in a thousand pieces. It will not be an easy knockout. I will punish him a lot, and then after that, I will knock him out. He will suffer a lot. I hope that somebody in your corner, the doctor, your team, your management -- be sure that they stop the fight. Because I will never stop. I will continue punishing you."

"I never was a puppet of my promoter. ... I want to fight the best. Not like Junior. I want no optional defense. I want what the people want. You're not supposed to take this fight. It will be very painful for you. I will do it for the Argentinean people, all the Latino people, all the Mexican people that support me. Because you never respect the sport, it's going to be painful for you."

A huge shout out to Scott Christ from Bad Left Hook for his awesome compilation of quotes. See the rest of the talking points in their entirety right here and be sure to stay tuned to MMAmania.com for more "Chavez Jr. vs. Martinez" coverage in the coming days.

Special thanks to AT&T for sponsoring this post as part of its Julio Cesar Chavez Jr. vs. Sergio Martinez fight coverage.