Share All sharing options for: UFC on FX 5 tickets for sale soon for 'Browne vs Silva' at Target Center on Oct 5 in Minneapolis 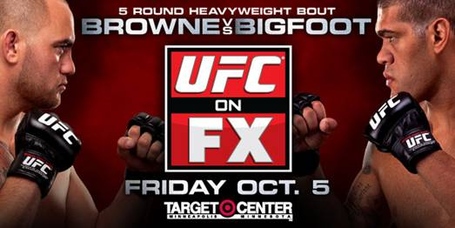 UFC Fight Club members and UFC Newsletter subscribers, naturally, will be able to scoop up tickets prior to them being available for public consumption thanks to two separate special presales.

UFC on FOX 4 will be headlined by a Heavyweight battle between undefeated prospect Travis Browne and former EliteXC and Strikeforce standout Antonio Silva. Top flyweight title contenders John Dodson and Jussier da Silva are expected to thrown down with a potential 125-pound title shot on the line.

In addition, Matt Mitrione vs. Rob Broughton will face off for a spot in the heavyweight pecking order.

UFC President Dana White weighs on on the main event match-up after the jump.

"Travis Browne is undefeated in his career and wants to prove that he's ready for a shot at the title. He's got a tough test in front of him in ‘Bigfoot' Silva, who's beaten two former UFC champions and also finished Fedor. I'm excited to finally get back to Minneapolis and I'm confident this card is going to deliver for the fans at the Target Center!"

UFC on FOX 4 tickets can be purchased through StubHub.com (Note: StubHub often has seats available even if the event is "sold out"). It will also be available to watch on FOX at 8 p.m. ET on fight night.

For the latest UFC on FX 5 news and notes check out our complete event archive right here.