ONE FC 5 results and LIVE fight coverage for 'Sylvia vs Arlovski 4' TODAY (Aug. 31) in Manila

Share All sharing options for: ONE FC 5 results and LIVE fight coverage for 'Sylvia vs Arlovski 4' TODAY (Aug. 31) in Manila 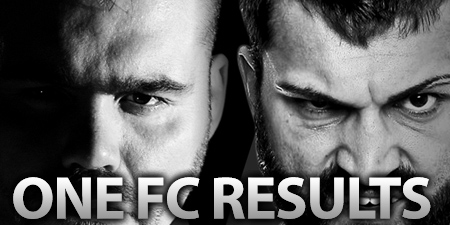 One Fighting Championships returns TODAY (August 31, 2012) to the Smart Araneta Coliseum in Manila, Philippines, with a locked and loaded event.

MMAmania.com will provide LIVE blow-by-blow, round-by-round coverage of One FC: Pride of a Nation below, beginning with the main card at 11 a.m. ET. In addition, we'll deliver up-to-the-minute quick results of all the undercard action much earlier in the evening (beginning at 8:30 a.m.).

Headlining the main event of One FC: Pride of a Nation will be the former Dream bantamweight and featherweight champion Bibiano Fernandes, one of the top ranked 135-pound fighters in the world, as he takes on Gustavo Falciroli, a champion out of Australia.

Also on tap is the fourth bout between former UFC heavyweight champions Andrei Arlovski and Tim Sylvia as well as a lightweight attraction between One FC stars Eduard Folayang and Felipe Enomoto.

There will be plenty of all-star action taking place as former UFC standouts Phil baroni, Jens Pulver and a trio of Gracies (Igor, Rolles and Gregor) are all slated to be competing throughout the event

Check out our complete One FC results after the jump (beginning at 8:30 a.m. ET).

Round two: Leg kick from Fernandes and Fernandes lands a nice right hand on the feet. Falciroli goes down and Fernandes pounces with punches on the ground. Fernandes keeps stepping over Falciroli's half guard and he's attacking from side control and Falciroli is bleeding. Fernandes lands some short blows but doesn't have the space to really land anything significant. Both men are scrambling on the ground and Falciroli tries to punch Fernandes but nothing is being thrown that hard. Both men are in a bit of a stalemate here as time is running out in the round. 10-9 Fernandes

Round three: Falciroli scores a takedown and Fernandes immediately takes Falciroli's back but the Aussie slips free. Fernandes attempts a triangle and then an armbar but Falciroli squirms loose and they're back to their feet. Both men exchanging relatively evenly and Falciroli throws a solid head kick. Fernandes backs him into the cage and lands a wicked elbow on the exit. Fernandes has slowed down considerably this round. Nice right hand from Fernandes and Falciroli drops again right at the end of the round. 10-9 Fernandes

Round two: Big combination from Folayang blitzes Enomoto early but he can't finish. Nice counter left-right combo from Folayang catches Enomoto on the way in. Big flurry from Folayang has Enomoto in trouble but he again recovers and whips a nasty leg kick. Folayang presses forward with a huge combination again but Enomoto stands his ground and responds with a pair of kicks. Enomoto eats a 1-2 square on the jaw and barely reacts. Enomoto continues pressing forward and Folayang crushes him with a right hand which drops him. Enomoto is in big trouble and Folayang is swarming with punches. Enomoto survives until the bell. 10-9 Folayang

Round three: Solid strike from Enomoto early and Folayang has slowed down a bit. Enomoto presses forward and Folayang wings a huge pair of right haymakers to back him off whenever he gets too close. The pace is definitely slowed and both men are trading considerably more even now. Nice leg kick and then body kick from Enomoto and he's definitely the aggressor now. Right hand lands for Enomoto. Enomoto keeps pressing forward and Folayang misses with a spinning attack. Leg kick from Enomoto and Folayang catches it and drags him to the ground. Folayang throws some punches from above and gets backed off with an upkick at the final bell. 10-9 Enomoto

Round one: Both men trade punches early. Sylvia is jiggling in the cage center and he lands a left counter. Nice right hand from Sylvia and he gets inside in the clinch, blasting away with right hands. Arlovski attempts a trip but can't secure it. Now he's got Sylvia pressed against the cage. Big 1-2 from Arlovski but Sylvia just ate it and stepped forward. Leg kick from Arlovski and Sylvia backs him into the fence, throwing a knee to the body. Another knee from Sylvia and Arlovski wraps him up. The ref separates them and both men trade big punches. They egg each other on and Arlovski throws a head kick which is partially blocked. Sylvia clinches again and presses Arlovski into the cage. Arlovski has a body lock with over-under and Sylvia throws a pair of left hands. Big knee from Sylvia and then another. The ref separates them and Arlovski lands a left jab. Leg kick from Arlovski and Sylvia scores with a right hand. Sylvia unloads a flurry of punches sensing that Arlovski is hurt but Arlovski hangs in there. Knee from Sylvia and they clinch until the end of the round. That put Sylvia over the top for me. 10-9 Sylvia

Round two: Arlovski lands a nice right hand early and he doubles up the left jabs. Good kick and a right hand from Arlovski and then another right hand. Sylvia eats a leg kick and both men trade shots in the clinch. Short uppercuts from both men and Arlovski and Sylvia collide heads. Arlovski's cardio seems to be better now and the tide has started to turn towards Arlovski. Decent left hand from Sylvia and he clinches again, throwing some knees against the fence. Sylvia looks like he's lost a lot of zip on his punches. The ref separates them and Arlovski lands some big punches. Nice combination of hooks from Arlovski and Sylvia fires back on the inside with uppercuts. Sylvia again presses Arlovski into the fence. They separate and Arlovski is dancing around Sylvia now. Sylvia presses Arlovski into the cage and he seems to be resting here. The ref separates them with 30 seconds left in the round and Arlovski lands a nice right hand. Huge right hand and then another and Sylvia goes down. Sylvia is hurt and Arlovski throws two soccer kicks but the ref didn't allow them and he calls time. Arlovski receives a yellow card. Sylvia has five minutes to recover or it may end in a no contest. Sylvia says he sees "two of the ref" and they rule it a no contest.

Final Result: The fight between Tim Sylvia and Andrei Arlovski ends in a no contest (illegal soccer kicks)

Round one: Kelly throws a push kick early and then another kick. Big right hand from Kelly staggers Pulver but he gets overaggressive and Pulver's on top of him. Kelly reverses him and he's on top in Pulver's full guard. Kelly tries to pass and Pulver pops back to his feet. Kelly tries to throw Pulver over his shoulder but gets denied. Kelly wades in and Pulver drops him with a left hand! Pulver tries to follow up but doesn't land anything and Kelly is back to his feet. Head kick misses from Pulver and Kelly scores with a nasty leg kick. Pulver seems confident now and his left hand is scoring nearly every time he throws it. Nice left from Kelly and the fight's momentum has shifted. Inside leg kick from Kelly and then another kick. Pulver eats a right hand and fends off a takedown attempt. Pulver lands a nice kick to the body and then blasts Kelly with a pair of body shots. Kelly whiffs with a one-armed judo throw and Pulver is on top in side control. Pulver throws a knee to the head on the ground but then lets Kelly back to his feet. Head kick is partially blocked by Pulver. Pulver is really loading up the left hand. He lands another left which paritally stuns Kelly and he's pouring it on here. Pulver is in control as time expires. 10-9 Pulver

Round two: Kelly lands a big right hadn and then another. Pulver is hurt but he eggs Kelly on. Pulver shoots in for a takedown and Kelly stuffs him. Pulver is hanging onto a single leg and he dumps Kelly on the ground but can't keep him there. Kelly is putting the pressure on Pulver and Pulver looks like he's in major trouble. Huge body kick from Kelly and Pulver is folded in half. A couple more punches and the ref intervenes.

Final Result: Eric Kelly defeats Jens Pulver via TKO at 1:36 of round two

Round one: Both men feel each other out early. Bonello throws a leg kick and Gracie dives for a takedown, taking him down straight into half guard. Gracie passes directly to mount and this doesn't look like it'll last much longer. Gracie has an extremely high mount trying to get Bonello to give him some space. Bonello bucks but can't get Gracie off. Gracie postures up and drops a few punches and Bonello is bleeding. Gracie is attacking with an arm triangle but Bonello slips free and pops back to his feet for about two seconds. Gracie takes him back down to finish the round. 10-9 Gracie

Round two: Gracie scores an early takedown and he passes quickly to mount. He attacks with big punches and Bonello is not defending very well. Gracie tries to set up an armbar and Bonello bucks. Gracie is now in side control, dropping strikes. Now Gracie passes again to mount but gets bucked again, but passes straight back to mount. Bonello is covering up and eating strikes. Gracie tries to open up for a submission and Bonello scores a sweep. He's in Gracie's full guard and he stands up, kicking at Gracie's legs. He dives into Gracie's guard and Gracie reverses him, taking top position at the end of the round.

Round three: Gracie attacks and is looking for a takedown but Bonello is fending him off for now. Finally, Gracie takes him down from behind and immediately takes his back, locking in a rear naked choke with both hooks in. It's tight and Bonellow taps.