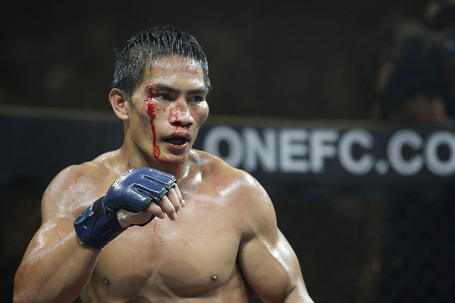 Less than four days to go until ONE FC's first ever show in the Philippines and it's time to preview the star-studded main card which features three former Ultimate Fighting Championship (UFC) champions, two Universal Reality Combat Championship (URCC) champions and one DREAM champion.

Manila has never played host to a mixed martial arts (MMA) event of this magnitude and with the 16,500 capacity Smart Araneta Coliseum to fill ONE FC 5, matchmakers have booked as many recognizable names as possible, be they Filipino fighters or members of the famous Gracie family.

Despite the star power on display for the benefit of the local audience, all six fights on the main card look set to be competitive, which should make for an entertaining night for the worldwide audience watching the online stream.

ONE FC fights have a tendency to be finished with far fewer decisions than average and hopefully this trend will continue at ONE FC 5: "Pride of a Nation."

Here is our preview of the six main card fights:

Gracie's two losses both came against much more experienced opponents at the start of his career and after signing for Bellator after only two fights it is difficult to dispute his claim that he was given harder fights because of his surname.

Since leaving Bellator he started facing fighters with a similar number of fights and dominating them with four straight submission wins going into this fight. Jung Hwan Cha will provide a stern test of Gracie's credentials because he is more experienced and has faced a couple of UFC level fighters.

The four submission losses on Jung's record will be cause for confidence for the Gracie camp but the 2010 KO win over Ryo Chonan is a huge red flag. Jung is capable of finishing a fight with strikes and I think that is his best chance of winning, if Gracie can get the fight to the floor a submission win will probably be on the cards.

Gracie has size on his side against a fighter who won King of the Cage titles at cruiserweight and light heavyweight but Bonello has a significant advantage in terms of experience. Both men are Brazilian Jiu-Jitsu (BJJ) black belts but given the calibre of the Brazilian Bonello might try and implement a stand up based strategy.

The issue for the Australian veteran is that most of his wins come by way of submission but unless he can damage Gracie to the point he is no longer capable of defending himself he is highly unlikely to win this one with any sort of submission.

All Gracie's wins have come by first round submission so if Bonello's BJJ is good enough to survive the first few submission attempts and his opponent starts to tire he might be able to capitalize but Gracie's size and superior grappling skills should allow him to finish the fight fast if he can secure the takedown.

This is a big fight for the Filipino fans who will know all about former UFC champion Pulver. A win over such a recognizable opponent for Kelly would make a statement about the standard of MMA in the Philippines, particularly if he can do it impressively, and the crowd will be behind him.

Fighting in front of 16,500 people against the forerunner for the ONE FC featherweight belt should be incentive enough for Pulver to have put together a proper training camp, something which hasn't always been the case in recent years.

Kelly tends to win by submission but is not afraid to use his stand up. Pulver's boxing and wrestling are solid and he will be dangerous in the opening exchanges but the longer the fight goes on the more it will favour the younger man and if Pulver starts to tire Kelly could finish him with strikes or a submission, something which will be very difficult to do while the ex UFC champ has a full gas tank.

We all saw the first three fight so this one shouldn't have any surprises in store, but then the way the first two meetings between these fighters was very surprising, so who knows?

Whatever happens it will be better than the third fight because, unlike at UFC 61, this is only set for three rounds. I have a feeling this fight will end suddenly and violently for the following reasons: a) Sylvia is convinced Arlovski has a weak chin and b) Arlovski's boxing is much better than Sylvia's

If Sylvia tries to test Arlovski's chin looking for a KO, which I think he will, he could well get caught by someone whose boxing was sufficiently good for him to get an offer from Golden Boy a while back. I think someone's going to get knocked out here and I think it's going to happen in the first round.

For the Filipino fans this is the main event, Folayang has found himself anointed as 'MMA's answer to Manny Pacquiao' which is a moniker he could probably do without. Coming off the controversial loss to Ole Laursen he has enough pressure on him already and this fight has got 'must win' written all over it for him.

It all makes for a perfect storyline for a fighter who, in the true Filipino spirit, is quite prepared to hit and get hit. Enomoto won't back down for a fight and the much anticipated 'stand up war' is bound to materialize although I do think we will see a few takedowns thrown in too.

Enomoto is tough and well rounded and never makes life easy for his opponents. If Folayang can put on the sort of Wushu clinic with which he dominated A Sol Kwon he should be the favourite but if he decides to rely on too many spinning attacks like he did against Laursen I think Enomoto might get the better of him.

I think this will be a three round war and a strong candidate for fight of the night and it wouldn't surprise me if it made for a difficult decision for the judges.

Fernandes is the reigning DREAM bantamweight champion and one of the top 135 lbs fighters in the world. He made headlines by rejecting the UFC in favour of ONE FC and has been rewarded with a fight tougher than the one he was originally announced as participating in at UFC 149.

Falciroli, a naturalized Australian, is a BJJ black belt who will have a size and reach advantage. With both fighters having such strong grappling credentials it will be interesting to see who shoots for the takedown first or if they both try to keep it standing.

With size on his side Falciroli might be looking for a stand up war and he will be conscious that Fernandes is the more decorated grappler. It could all come down to who can dictate where the action takes place and with so many unknowns it is very difficult to predict a winner.

The undercard of ONE FC: 'Pride of a Nation' (see our preview here) is available to view totally free of charge while the entire show costs 10 USD. For more information visit: http://www.onefc.livesport.tv/schedule