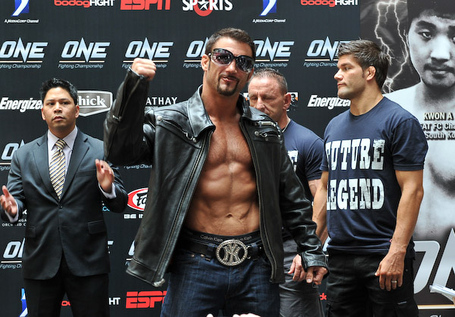 The most significant event in the history of Filipino MMA is only a few days away as ONE Fighting Championship: 'Pride of a Nation' is set for the Araneta Coliseum on Friday night. It will be the first time that the biggest MMA promotion in Asia has touched down in the Philippines and a sell out crowd of 16,500 people is expected.

The Philippines will be the fourth country that ONE FC has been to after Singapore, Indonesia and Malaysia and the venue in Manila has previously hosted boxing fights involving both Nonito Donaire and Manny Pacquiao as well as the famous 'Thrilla' in Manila' which gives this occasion a real sense of historical importance.

With UFC 151 being cancelled all eyes this weekend will be on the likes of former UFC champions Tim Sylvia, Andrei Arlovski and Jens Pulver, DREAM champion Bibiano Fernandes and a host of URCC champions as well as the three Gracies on the card in Manila.

Here is a fight by fight breakdown of the first five fights:

With a 6-1 record Banario probably feels he should be in contention for a shot at the ONE FC featherweight title but he needs to bounce back from the loss he suffered on his ONE FC debut in Jakarta. He is a member of Team Lakay and has very strong Wushu skills and has promised to try and make this a stand up war.

Benibe has never been to a decision in seven fights, neither has Banario and this has a first round finish written all over it. Benibe used to compete at a lower weight but has bulked up a lot and hopes his superior strength will be enough to negate Banario's height and reach advantage.

Expect Banario to come out guns blazing and set a crazy pace with plenty of sidekicks thrown in (he once won a fight with a side kick KO). If Benibe, who is a well rounded fighter, can keep up he has a chance but if not he is likely to be overwhelmed by the early onslaught.

Chilson is one of the most underrated fighters on the ONE FC roster and has solid Muay Thai, wrestling and BJJ. He's a difficult fighter to beat and stylistically this could be a bad fight for Judo black belt Wiratchai.

The Thai fighter is 2-0 but is facing a big step up and Chilson has twice as many fights and the invaluable experience which comes from training day in, day out with the team of world champions at Evolve MMA.

Wirachai is young, aggressive and enthusiastic and has a reputation as being a fast learner. This could be a fun fight but I think Wiratchai needs to keep it standing because Chilson, who is a blue belt under Renzo Gracie, should be stronger on the ground. I don't see this one going the distance.

Two veterans meet in a contest which will without doubt prove to be a defining moment for one man. A win over Baroni would be the biggest of Ribeiro's career but Baroni knows he can revitalize his own career and instantly put a difficult 12 months behind him by defeating Ribeiro.

Baroni has shown a willingness to use his wrestling in recent fights but he will definitely back himself in the stand up exchanges and will look to throw leather early on and try to blow the Brazilian away with the sort of flurry of punches which used to be his trademark.

RIbeiro is a BJJ black belt an danother Evolve MMA team member who is likely to have a carefully formulated gameplan. It probably involves looking to take the fight down and submit Baroni and he will be wary of his opponent's punching power early on. I think this will either finish in an early KO for Baroni or a later submission for Ribeiro.

Nicholas Mann is the URCC light heavyweight champion and this fight is taking place at a catchweight of 80 kgs. That could play into Gracie's favour as he has struggled with stamina in the past and might benefit from having to cut a few less kgs.

With his two brothers also on the card Gracie will want to set the tone with a submission win but, having burned himself out going for early submissions in his last fight, might employ a more methodical, patient approach this time around.

Mann is something of an unknown quantity but he will look to stuff Gracie's takedowns, keep the fight standing and dominate the stand up exchanges. Gracie showcased some explosive wrestling in his last fight and will probably put Mann on his back sooner rather or later, the longer Mann survives the more chance he has of winning but he will almost certainly need to survive some early submission attempts.

This is likely to be a contender for fight of the night. Belingon deliberately fights at his walk around weight in order to preserve his superb stamina and he will be aggressive from the get go and set a very fast pace.

Belingon has excellent boxing and an arsenal of unorthodox kicks but he will be giving away size and reach against Kim, who is also very aggressive. Don't expect much of a feeling out process in this one as these are two young, hungry fighters with a point to prove who are bound to come out banging.

For me Belingon is the more technical fighter and if he can find his rhythm he will pick Kim part but he could equally find himself overwhelmed by a bigger opponent. These two are well matched and this should be a war, I wouldn't like to have to pick a winner but if the fight lasts more than a round Belingon's cardio could be the difference.

The undercard of ONE FC: 'Pride of a Nation' is available to view totally free of charge while the entire show costs 10 USD. For more information visit: http://www.onefc.livesport.tv/schedule