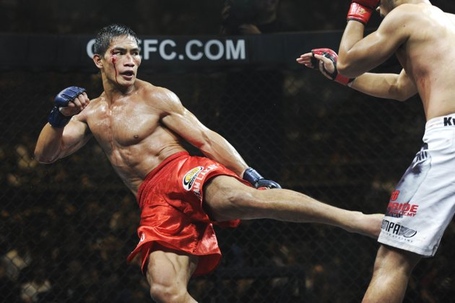 Eduard Folayang is reaching the final stages of his fight preparation in the mountains of Baguio. The Team Lakay standout is renowned as being one of the hardest working fighters in Asian mixed martial arts (MMA) but even by his own high standards this training camp has been particularly grueling.

ONE FC is the first major global promotion to hold an event in the Philippines and the media interest has been intense. 16,500 fans are expected to fill the Araneta Coliseum on August 31st and they will all be cheering for Folayang when he takes on Felipe Enomoto.

For a man who is more comfortable fighting than talking this has proved an unwelcome distraction but the 27 year old Filipino who has an 11-2 pro record is looking forward to getting back to what he does best.

"Yes I have had to go to Manila two times to meed the media and it is a long way on the bus from Baguio. I prefer to focus on my training but I understand that this is a very important event and a lot of newspapers want to know about the ONE FC and I am happy to help people know more about MMA but now that the fight is very close I am only focused on my training for Felipe."

Folayang has a reputation for getting involved in the 'fight of the night' and has picked up a bonus every time he has been inside the ONE FC cage. He is in his element when battered and bruised and going toe to toe with an opponent and this is exactly the sort of fight he expects against Enomoto,

"I have seen both Felipe's fights for ONE FC and he was not afraid to stand with Zoro (Moreira) or Ole (Laursen) so I do not think he will back down from standing with me, I am expecting a war. I think he is good on the ground but he is also not afraid of a stand up war, that is the sort of fight we expect and that is what we are preparing for."

On his ONE FC debut Folayang, who is the URCC welterweight champion, lost the first round against experienced Korean A Sol Kwon and suffered a badly broken nose but bounced back to finish strongly and dominate the remainder of the fight.

Last time out he was not so lucky against Ole Laursen as he again seemed to be behind at the end of round one but came back to do well in rounds two or three. Many felt he had done enough to win but Folayang found himself on the wrong end of a split decision.

It was only the second loss of his entire career and for a fighter looking to challenge for the ONE FC lightweight title the defeat was a definite setback. This makes it even more imperative that Folayang wins his next fight and he admits that this is something which weighs on his mind,

"The fight with Ole was very close, it could have been a draw and I could have won but I have to respect the decision of he judges. I want to be ONE FC champion and if I lose two fights in a row it will be very difficult for me to do that, I must beat Felipe and after that if the ONE FC want me to fight Ole again I will be happy to do that."

Folayang has not fought in Manila since 2010 as he has been competing predominantly in Singapore first for Martial Combat and then for ONE FC. He cut his teeth as a mixed martial artist on URCC shows in the countries capital and is looking forward to going back,

"I am happy to be fighting in Manila again, people there love MMA and they always support Filipino fighters. I remember watching Manny Pacquiao fight at the Araneta Coliseum on TV and it is a great honour for me to be fighting in the same arena."

In conversation with Folayang he makes constant reference to how proud he is to be representing the Philippines and what an honour it is to be fighting on the biggest MMA show in the country's history but for such a fierce competitor it is never enough to simply turn up, he needs to win,

"Everyone remembers when Ali fought Frazier and I want to make this a fight which fans will remember forever, a real war. The most important thing for me is to win, if I win by submission or KO in the first round I will be very happy but I think this is going to be a three round stand up war."

ONE FC: 'Pride of a Nation' takes place on August 31st at the Araneta Coliseum and the entire card can be viewed online for 10 USD at: http://www.onefc.livesport.tv/.