Review for debut episode of 'Fight Factory' on Nuvo TV

Share All sharing options for: Review for debut episode of 'Fight Factory' on Nuvo TV 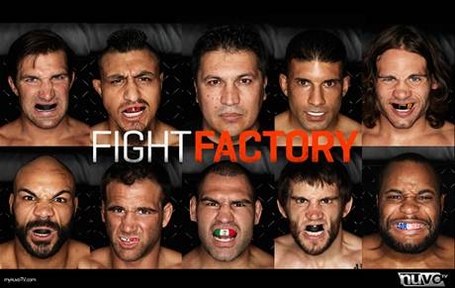 Mixed martial arts involves some of the most incredible emotional highs and the lowest of the lows. You have to remember that for every fighter that is celebrating in the cage, another just had his dreams and potentially months of training crushed.

There's so much going on behind the scenes for every fighter, but they do a pretty damn good job of keeping the fans and media in the dark.

Tonight was the premiere of Fight Factory on Nuvo TV, a new TV series which follows all the behind-the-scenes goings-on of American Kickboxing Academy. It explores everything from the intensity of training and sparring, the relationships between the fighters, their trainers, their managers, their families and more.

In both premiere episodes tonight, the series already has me hooked.

Somehow, in each hour-long episode, the show's creators manage to explore all the nuances that are going on with important subjects like self-doubt, fighter pay, getting older and finding out whether you're good enough to make it in this wild and crazy sport.

There's the rookies working their way up in Mark Ellis and Gabriel Carrasco, there's the fighters in their prime like Josh Koscheck, Jon Fitch and Cain Velasquez, and of course, there's the other end of the spectrum with fighters potentially on their way out but still trying to hold on like Phil Baroni.

I felt the most impactful part of tonight's show was Mark Ellis, a national champion heavyweight wrestler out of Missouri who was just getting his start in mixed martial arts. It followed his training, showing how far behind he was while sparring against Cain Velasquez and the adjustments he needed to make if he wanted to be a successful MMA fighter.

When he lost, it was devastating. It showed all the emotions and how he reacted to not being the best at something for the first time. This quote in particular stuck with me:

"I just lost to a guy who was in prison while I was off winning the national title."

The show also gives you a newfound respect for all the extra work that managers, trainers and agents have to do behind the scenes to keep the cogs turning. There's always drama, things that need diffused, fights getting cancelled and injuries. It has to be incredibly stressful.

And I haven't even started on one of the key developing storylines which involves Josh Koscheck leaving the gym after eight years to start his own and the decisions it forces all key members of the show to make regarding how they move forward with the situation.

This is something that is likely going to carry over throughout the season so if you're a fan of the high school drama, you'll eat it up.

I'm a big fan of mixed martial arts documentaries and the presentations of Fight Factory was like one of those films moving at 100 miles an hour, but the pacing never felt off. This is must-see television, not just for hardcore MMA fans, but for anyone who can appreciate the hard work that goes into being a success at anything.