UFC 100 feels like it happened forever ago, almost literally. Though it's only been a few years, it's easy to forget the insane level of hype there was heading into an event of that magnitude.

Until last night (Sat., July 7, 2012) when UFC 148: "Silva vs. Sonnen 2" invaded the MGM Grand Garden Arena in Las Vegas, Nevada, for what the promotion was calling its biggest fight of all time -- the Anderson Silva vs. Chael Sonnen rematch.

After their first encounter played out the way it did, with Sonnen dominating the middleweight champion for 23 minutes before getting caught in a submission and tapping, there wasn't a single fight fan on Earth who wasn't ready for another go between the two best 185-pound fighters on the planet.

Some pre-fight shenanigans at the press conference and weigh-in helped add some spice to the proceedings and by the time they squared off for the staredown inside the Octagon, it was at a fever pitch.

The first round played out similarly to the first round of their initial meeting. Sonnen earned a takedown and spent the rest of the round on top, easily winning on the judges scorecards.

But then round two came and that takedown didn't come so easy. Then he tried to land a crazy spinning backfist and ended up falling over, leaving himself open for an attack from "The Spider." When it came, it came in the form of a knee while Sonnen was sitting with his back against the fence.

And it looked like it may have hit him in the face.

Upon many replays showed by the UFC afterward, it looked as though the knee was legal. This screenshot from Twitter user @Jeffyfxr, who captured a shot that seems to put the debate to rest: 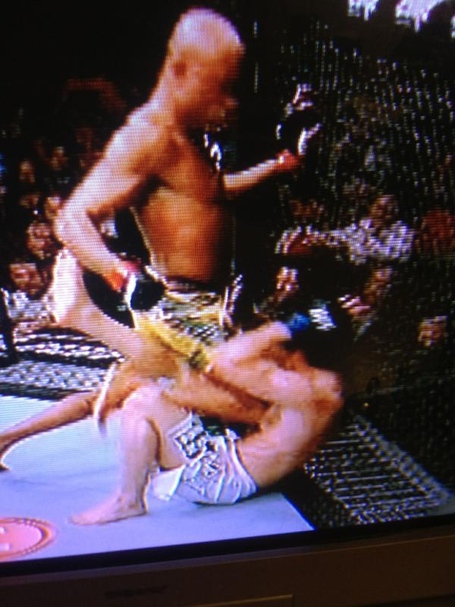 Of course, that hasn't stopped a large segment of the mixed martial arts (MMA) fanbase, likely Sonnen fans, from using this as the major factor in Silva's victory.

Will Sonnen do the same in the months to come? Time will tell.

In the meantime, let's hear your thoughts on the illegal knee that wasn't. Or was, whatever you believe, Maniacs.

For more on Silva's win over Sonnen click here, here, and here.