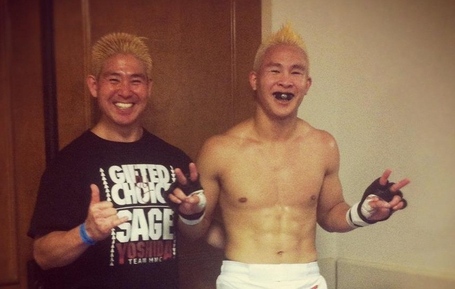 Most people make their professional fighting debut in a small venue against an opponent with a similar level of experience. Sage Yoshida is jumping straight in the deep end, as the 19 year old is going up against Ultimate Fighting Championship (UFC) and PRIDE veteran Akihiro Gono at DEEP: "Tokyo Impact" on July 21, 2012.

Of mixed Thai and Japanese heritage, Yoshida is based in Hawaii and has been studying martial arts since an early age, where his training soon began to "take off."

"I first started training in martial arts when I was five years old. My father felt that it would be a great way to teach me coordination, discipline and gain self esteem. He had me train in Kempo under the association Universal Kempo here in Hawaii and then I began training with the legendary trainer, Harumi Shimanishi, who was also one of the co-founders of the American Martial Arts Center. He, along with my father and two other individuals, Mike Tanaka and Derek Matsumoto, founded the Hawaii Martial Arts Center which is where my training began to really take off."

Gono has officially retired from mixed martial arts (MMA), but he has fought Muay Thai and K-1 in the past and this fight will take place under shootboxing rules. Although the Japanese veteran is more renowned as an MMA fighter than a kickboxer, he is still a fearsome opponent for Yoshida to be facing in his first-ever professional fight.

"I am very nervous for this fight, but at the same time i am anxious to be competing at this level in this event especially against someone like Mr. Gono. I've grown up watching him fight and always admired him and his fighting style."

The bout came about because Yoshida's father is extremely well connected in Japan where he has worked extensively with the K-1 organization.

"My father, Kevin Yoshida, is a judge and referee for the K-1 kickboxing organization in Japan. He has many friends who are prominent in the MMA community in Japan who have seen me grow up as well. From what i heard, Mr. Okabayashi, one of my father's fellow officials from K-1, has been showing my fights to other promoters and friends in Japan, and just recently we received an email for the opportunity to fight in Japan against Mr. Gono."

Yoshida has 15 years of martial arts training under his belt and has competed in MMA, kickboxing, Jiu Jitsu and Karate but never at a professional level. He realizes that the odds will be against him but feels he has nothing to lose by testing himself against such a renowned opponent.

"I feel that I do not have the credentials like Mr. Gono and a lot of professional fighters out there, so this will be an opportunity where I am really diving in head first. But i am confident in my abilities that I can hold my own ground. It gives me more of a confidence boost to know that i have nothing to lose at this point. i have been training hard my whole life for an opportunity like this and its like a dream come true."

Thailand and Japan are two nations renowned for producing fighters and Yoshida appears to always have been destined for a career competing in martial arts. The first ever payday of his fighting career is just over two weeks away but he says he is looking forward to it and he will be ready.

"I am very excited to fight in Japan! it has always been one of my dreams and goals to fight in Japan. It motivates me to train even harder so that I can be able to fight well for the fight fans in Japan. I train everyday. Some days won't be as intense as others as my body needs to rest and recover from the damage done during some rigorous sessions. Most of the time I will train early in the morning and at night as I work during the daytime. If I'm not focusing on the actual martial arts training, I will be weight training or running, as well as watching film and footage on fighters. This way, I try to prepare myself physically and mentally."