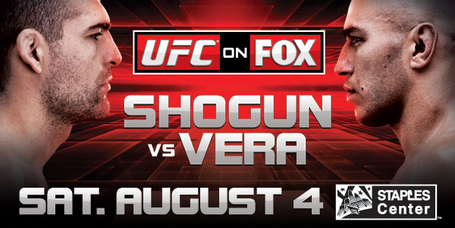 Ultimate Fighting Championship (UFC) will hold a media conference call today (July 30, 2012) in advance of UFC on FOX 4: "Shogun vs. Vera" which will take place this Saturday night (August 4, 2012), at Staples Center in Los Angeles, California.

The conference call will begin at 2:00 p.m. ET. Scheduled to attend will be the headlining fighters for the evening: Mauricio Rua, Brandon Vera, Lyoto Machida and Ryan Bader as well as UFC President Dana White.

"Shogun" Rua is the former UFC light heavyweight champion. He won the title in 2010 but lost it last year to current champion Jon Jones. Since losing the belt, he avenged a loss to Forrest Griffin and then had the 2011 "Fight of the Year" against Dan Henderson in which he raised his stock in a losing effort. Brandon Vera has not had his stock raised, losing more than he's won as of late, but a close decision victory over Eliot Marshall opened the door for him to step in and fight Rua as an injury replacement. This will be a huge opportunity for "The Truth" to get back to where he feels he belongs.

Lyoto Machida is also a former UFC light heavyweight champion, winning the belt from Rashad Evans and defending it once before dropping the title to Rua. He earned another shot at glory last December against Jon Jones, but was choked unconscious by the champ in the second round after many felt he won the first round. He has not fought since. Ryan Bader is the most resurgent fighter of the four headliners. After dropping two straight, he defeated Jason Brilz via first round knockout and then upset former champion Quinton Jackson in Japan earlier this year. Bader is looking for his second straight victory over a former title holder.

We'll have all the updates from the UFC on FOX 4 conference call after the jump:

Brian Hemminger here. The press conference is scheduled to begin at 2:00 p.m.

Dana White: A win puts Shogun right back at the top of the division. He's probably the number 2 guy in the world.

Shogun Rua: Vera is a guy that's very well known in the MMA business and the UFC. He has a strong name and Glover still has a long way to run. Right now the best option is a guy who's well known and Brandon Vera is the choice.

Dana White: I like Mike Swick personally and as a fighter. He's a great fighter. 14-4 and one of the originals from The Ultimate Fighter. We started joking around calling him "Mr Glass" around the office because of the injuries. It's good to see him back.

Dana White: I already announced that the winner of Vera and Rua gets the shot. We like impressive finishes. We like guys that finish. If you look at Shogun's last fight, his fight with Dan Henderson was one of the sickest fights of my life.

Dana White: Varner came out and looked amazing in his last fight upsetting Barboza and Joe Lauzon is always exciting. He did the same thing to Melvin Guillard.

Brandon Vera: Just watch me on August 4th (his response to critics)

Dana White: It's all about opportunities. Brandon accepted a fight against one of the best fighters of this decade and we'll see what happens.

Dana White: We put the "Road to the Octagon" together with Eric from Fox. The first 6-7 months has been a feeling-out period on how to get things clicking with UFC on FOX. We've got a lot of ideas we'll be implementing over the next year.

Dana White: Guys who fight on Fox are in line for title shots. We put important fights on Fox. That's what you're gonna see.

Ryan Bader: Machida brings a lot of problems to the table that you don't see a lot of fights or in the gym. You have to seek out training partners that have a little bit of that. If you can't find it in the gym, you'll be surprised in the fight. Being elusive and striking when he needs to are his best qualities.

Brandon Vera: My mindset preparing for Shogun has been amazing. This is an opportunity of a lifetime and you only get this call once. Training has been great. People from all over the globe have been coming in to help me get in shape for Shogun. I had a headstart on camp while preparing for Te Huna and it's been good. It's been amazing.

Dana White: I'm feeling the pressure feels pressure after UFC 149 card. I never want fans to think they waste their time if they stayed home to watch UFC.

Dana White: Mitrione wasn't in good enough shape to take the Browne fight. We tried everything we could to save that fight.

Dana White: I'm really excited about the Phil Davis vs Wagner Prado. It's 8-0 vs. 9-1, two of the best light heavyweight prospects in MMA.

Brandon Vera: I thought Jones was young punk when we fought and that I got what I deserved for underestimating him. I didn't train hard and didn't take him serious.

Shogun Rua: I'm only focused on Saturday, not on Jones.

Dana White: I will set a fight for Alexander Gustafsson in the very near future.

Lyoto Machida: I just found out on this conference call that the main event is for a title shot.

That concludes the conference call. Thanks for stopping by!