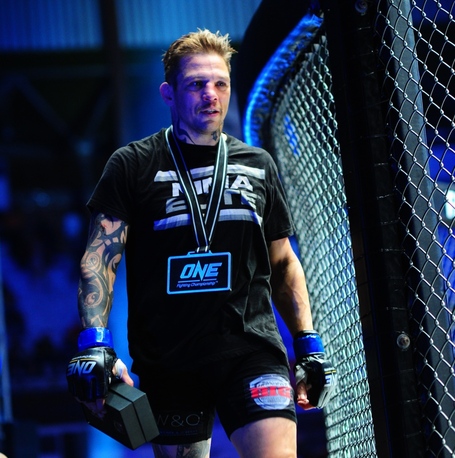 After an injury-enforced 18 month absence, Renato Sobral made an emphatic comeback at ONE FC: 'Destiny of Warriors' back on June 23, 2012, submitting a top ranked 205-pound fighter in Asia in just over 30 seconds. Tatsuya Mizuno was expected to be a formidable opponent, but the former Strikeforce Light Heavyweight Champion wasted no time in securing a fight finishing armbar.

"Babalu's" career has had its ups and downs, from defeating Trevor Prangley, Mauricio Rua and Jeremy Horn in a single night to win the IFC Light Heavyweight tournament, to coming up short when challenging for Chuck Liddell's UFC title.

He has also been in there with the likes of Chael Sonnen, Fedor Emelianenko and Dan Henderson, but feels that signing with the biggest mixed martial arts (MMA) promotion in Asia has given him a new lease on life.

"I had a wonderful time in Malaysia and Victor and his team were very professional and produced an event which seemed to function seamlessly. I would like to say thank you to Victor and everyone at ONE FC and I can't wait to fight for ONE FC again."

Coming from a man who is not afraid to speak out if he is unhappy, this is high praise indeed and although Sobral says he cannot confirm anything yet, he is expecting to be back in action at ONE FC: 'Pride of a Nation' which is being held at the 16,500 Araneta Coliseum on August 31st.

"My attorney, Richard Wilner, is in discussions about this with Victor and my position is this: I will fight anyone that makes sense. I would be delighted to fight in Manila and I am already back in training for the potential opportunity on the 31st."

Sobral has stated that he is willing to fight at anything from middleweight to heavyweight but that in order to either bulk up or cut down in a scientific manner he needs at least a couple of months notice. Weight was the issue when he was originally scheduled to face Melvin Manhoef in Singapore, but if these two can agree on a limit, that is one fight which would prove very popular with the Filipino fans.

The last win was the quickest of Sobral's career, but despite only being in action for just over 30 seconds, he still managed to sustain a minor injury requiring makeshift surgery from a surprising source.

"The straight right Mizuno threw didn't hurt me, though it was a good punch. I was off balance when I was struck and it caused me to fall. The punch he hit with me on the ground did hurt my nose a little bit, in fact, it made it a little bit crooked. Renzo (Gracie) was kind enough to straighten it out for me after the fight."

Mizuno came into the fight with a reputation as being heavy handed but made a fatal error when, with Sobral on his back, he looked to try and launch a ground and pound offense instead of just allowing him to get back to his feet. This involved a dramatic cartwheel style attack but the Brazilian says he wasn't fazed by his opponent's gameplan.

"I wasn't surprised because Mizuno is a dynamic fighter and his background in Judo makes him a viable opponent on the ground."

Despite being the first ever major MMA show to take place in Malaysia, ONE FC was an unexpected sellout with the 10,400 capacity Stadium Negara packed to the rafters. For the Brazilian Jiu-Jitsu (BJJ) black belt finding a home in such a professional promotion allows him to focus exclusively on what he does best, submitting people.

"Victor and the rest of his team at ONE FC were great. A promoter's job is to put butts in seats. It is my job to train to fight and fight. When a promoter does his job, the show should sell out and I hope all those in attendance realize that I did my job."

Sobral is expected to be a strong contender for the ONE FC light heavyweight title when it is eventually introduced but says this is not his main motivation at present.

"While there honor in holding belts, I do not fight for belts. I fight for my family. It is how I make my living, if the belt is on the line, even better, but I will fight anywhere, anytime against anyone who makes sense."

Something which definitely does meet with his approval is the ONE FC rule set which is an amalgamation of the unified rules and the Pride rules which proved so popular in the past. Although he hasn't had a chance to utilize soccer kicks, stomps or knees to the head of a grounded opponent, he has every intention of doing so.

"My background is no holds barred. It is who I am and what I love, I am all about it. I come from a soccer country, however I am terrible at playing soccer, so soccer kicks in the cage are the closest I will ever come to playing professional soccer. I like the opportunity to use knees on the ground, too."

June 23 was a busy night for King's MMA, Sobral's camp in Los Angeles. Wanderlei Silva was on the wrong end of a unanimous decision against Rich Franklin at UFC 147 but Fabricio Werdum blew Mike Russow away in less than a round and Sobral says it helped having so many training partners preparing for shows on the same date.

"That we all competed on the same night was very helpful because we were all trained to peak at the same time. This, however, is obviously very unusual. It is the day in and day out that matters. I train with the best guys in the world, from master Rafael Cordeiro at the helm and Wanderlei and Fabricio there most every day, there are multiple other training partners that I have, too many to name, that train with me every day."

"These guys, without the big name, are the guys who really push the training and my thanks and respect goes out to them. In addition to the guys named above, I would like to say special thanks to my boxing coach, Justin Fortune and Fortune Gym and my wrestling coach, Jacob Harman of Calvary Chapel. I apologize if I missed anyone."

He has only fought once since suffering a snowboard accident in the aftermath of his 2010 fight against Dan Henderson, but Babalu is looking to stay busy and wants to fight for ONE FC as many times as possible.

"I would fight every month if I could. The only reason I have not been fighting regularly is injury, it was not my choice. If ONE FC is doing 18 shows in 2013 then I will fight 18 times if they let me!"