UFC 151 results and LIVE fight coverage for 'Jones vs Henderson' on Sept. 1 in Las Vegas

Share All sharing options for: UFC 151 results and LIVE fight coverage for 'Jones vs Henderson' on Sept. 1 in Las Vegas 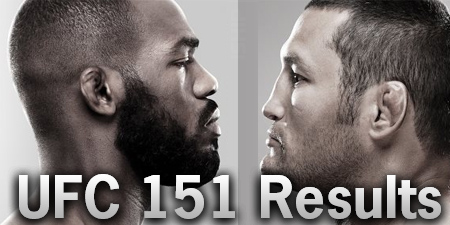 We're just over a month away.

Here is the current UFC 151 fight card and line-up:

MMAmania.com will provide LIVE round-by-round, blow-by-blow coverage of the main card action on fight night (Sat., Sept. 1, 2012), which is slated to air at 10 p.m. ET on PPV. The latest quick updates of the live action will begin to flow earlier than that around 8:00 p.m. ET with the "Prelims" bouts on Facebook and FX Channel.

For the latest UFC 151 news and notes check out our complete event archive right here.