UFC 149 'Prelims' preview and predictions for 'Faber vs Barao' fights on Facebook/FX (Pt. 1)

Share All sharing options for: UFC 149 'Prelims' preview and predictions for 'Faber vs Barao' fights on Facebook/FX (Pt. 1)

With Ultimate Fighting Championship (UFC) Bantamweight Champion Dominick Cruz out of commission with a knee injury (ACL), "The California Kid" -- the eternal number one title contender -- was left without a date, their UFC 148 showdown nixed by the torn tendon of "The Dominator."

The owner of one of the longest unbeaten streaks in mixed martial arts (MMA), Barao has carved a bloody swath through his competition in the World Extreme Cagefighting (WEC) and UFC, defeating top-10 contenders Brad Pickett and Scott Jorgensen in decisive fashion.

Barao -- the training partner of UFC Featherweight Champion Jose Aldo -- will meet Faber this Saturday (July 21, 2012) as the headliner of UFC 149 with the interim bantamweight belt on the line. In addition, the owner of another monstrous streak, Hector Lombard, will make his long-awaited Octagon debut against Tim Boetsch.

Before all that, however, we've got half-dozen "Prelims" bouts on the docket that will air on a mix of Facebook/FX prior to the pay-per-view (PPV) main card.

Check out part one of our UFC 149 "Prelims" breakdown after the jump:

Before I begin, I'd like to just take a moment to acknowledge my failure predicting the UFC 148 under card -- I went a pathetic 1-4 with my only successful pick being a -300 favorite. In recognition, I hereby present myself with this: 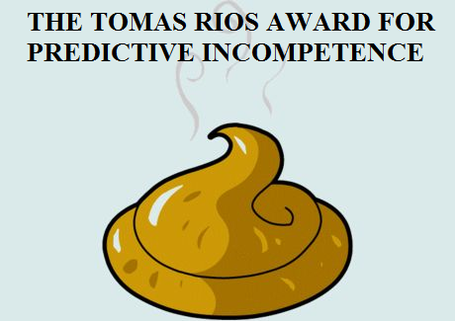 Now, let's get down to business.

Fighting out of Team Alpha Male, Brian Caraway (16-5) had the poor luck to be in Diego Brandao’s way during his tenure on The Ultimate Fighter (TUF) 14, coming out of the bout on the wrong end of one of the most brutal knockouts in recent memory. Undaunted, "Kid Lightning" went on to submit Dustin Neace in the second round of their clash on the finale.

Mitch Gagnon (8-1) was originally scheduled to make his UFC debut back in January against another TUF 14 alum, Johnny Bedford, but ran into Visa issues just days before the bout was scheduled to take place. Gagnon, fighting out of Canada, has tapped out eight opponents himself, all but one by either guillotine or rear-naked choke. Most recently, he guillotined David Harris last October for his seventh first-round finish. His sole defeat came in his third fight.

Neither of these guys is a big name and neither is a world-beater, but this has the potential to be one of the better fights of the night. Both guys win almost exclusively by submission, meaning there’s a good chance we’re in for a crazy grappling affair.

One that Caraway will come out on top in.

Gagnon has beaten some decent fighters, but he has less than half of Caraway’s experience and doesn’t appear to have the best takedown defense. His guillotine is solid, but against a Team Alpha Male representative, that ain’t happening.

The first round ought to be excellent, with Gagnon attacking from the bottom and Caraway hunting for back control. Once the second rolls around, Gagnon’s inexperience in the later rounds -- and the fact that he’s making his debut -- will come back to bite him as Caraway takes him down, passes his way to the back and chokes him out.

Long touted by those who follow the Japanese MMA scene, Antonio Carvalho (13-5) made a name for himself with his defeats of "Lion" Takeshi Inoue, Rumina Sato and, most notably, Hatsu Hioki under the Shooto banner. Unfortunately, Felipe Arantes had no intention of making "Pato’s" long-awaited UFC entry a welcome one, coming back from a tough first round to take home a unanimous decision victory. The loss snapped a three-fight winning streak dating back to Carvalho’s return from a two-year hiatus.

Daniel Pineda (17-8), for lack of a better word, exploded onto the scene, scoring two dramatic submission wins in his first two UFC efforts at the expense of Pat Schilling and Mackens Semerzier. The 26-year-old finishing machine (zero decision wins) unfortunately ran into a veteran roadblock in the form of Mike Thomas Brown, who scored a unanimous decision over him.

"The Pit" had previously won seven straight, five of them in the first round.

This is almost certainly my Japanese MMA rose-colored glasses talking, but I like Carvalho here. I’m inclined to forgive his poor cardio in the Arantes fight, which historically hasn’t been an issue, and chalk it up to Octagon jitters. Pineda is undoubtedly the better finisher, but Carvalho is most likely the technically superior striker and is quite durable.

Both men have very solid ground games, but Pineda is probably slightly better there. His takedown game hasn’t really been showcased, though, and the only time he found himself in an advantageous position against Brown was after a sweep. I don’t see him having much luck dragging down "Pato" if things go south standing.

This ought to be an exciting stand up affair, one that’s closely-contested, but one that Carvalho will slow down enough to take advantage of his karate prowess for a close, but clear-cut decision win.

Another Canadian fighting in his home country, Mitch Clarke (9-1) has historically found success with his submission game, which has earned him six tapouts. In his UFC debut against John Cholish, however, he found himself completely outgunned in that department, getting back mounted, flattened out and stopped via strikes in the second round. Clarke has never fought outside of Canada and has only competed outside Alberta twice.

Anton Kuivanen (16-5), from Finland, entered the UFC on the heels of a nine-fight win streak to face American prospect Justin Salas. Over the course of three entertaining rounds, Kuivanen found himself unable to handle his foe’s wrestling prowess, dropping a unanimous decision. He is 12-2 over his last fourteen fights after starting his career 4-3 and trains out of American Top Team. Twelve of his wins have come by stoppage, eight of them submissions.

Honestly, despite the loss, I was quite impressed with Kuivanen in his debut. Despite Salas’ wrestling abilities, Kuivanen consistently found his way to his feet and showcased some nasty kicks while there. I have no doubt that his work at American Top Team will make him even better at staying out of bad positions.

Clarke, on the other hand, was completely outgunned against Cholish in pretty much every department and slowed down considerably in the second round. Kuivanen doesn’t have big power, but he is a very skilled striker with a solid ground game. Clarke is probably the better on the ground, true, but his wrestling pales in comparison to Salas’, and the latter had all kinds of trouble keeping down Kuivanen.

With the jitters out of the way, I expect we see a better Kuivanen, one whose sprawl should be more than sufficient to turn it into a striking affair, one he has a major advantage in. Kuivanen lights him up on the feet over the course of three painful rounds.

Remember, too, that MMAmania.com will provide LIVE blow-by-blow, round-by-round coverage of UFC 149, beginning with the "Prelims" bouts on Facebook scheduled for around 6 p.m. ET. In addition, we will also provide LIVE, real-time results of the main card action as it happens throughout the evening this upcoming Saturday night.