Earlier this week, we teased you with the cover photo and behind-the-scenes video from ESPN the Magazine's "Body Issue," featuring Strikeforce Women's Bantamweight Champion Ronda Rousey, who certainly doesn't have any issues with her body.

Now we're back with the full Monty.

Rousey is preparing to defend her 135-pound strap against Sarah Kaufman at the upcoming Strikeforce event on August 18, 2012 from the Valley View Casino Center in San Diego, California. The Showtime network, which airs the "Rousey vs. Kaufman" event on fight night, will also give fans "All Access to the "Rowdy" champ beginning August 8.

More on that right here.

After the jump, see the other pic of Rousey (sans clothes) and be sure to see what other professional athletes have been prancing around in their birthday suits at the ESPN website right here. 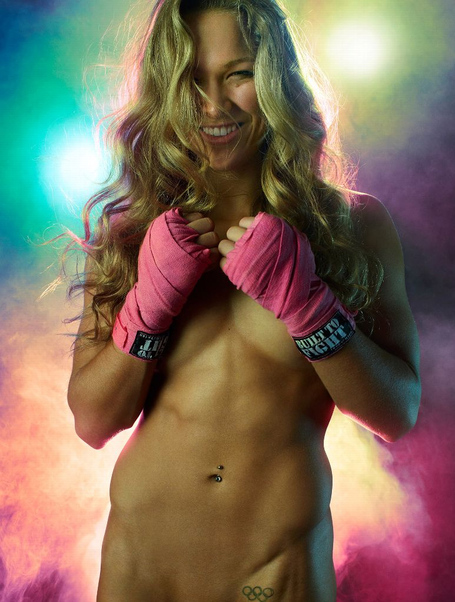 Photo of Ronda Rousey by Peggy Sirota for ESPN The Magazine.

What say you Maniacs, easy on the eyes? Or TMI?