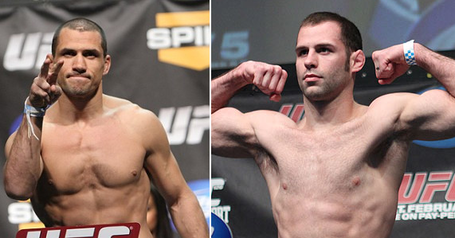 A veteran will make his welterweight debut while another makes his UFC return tomorrow night (July 11, 2012) as "The A-Train" Aaron Simpson takes on Kenny Robertson on the UFC on FUEL TV 4 main card in San Jose, California.

Simpson had a pair of impressive three fight win streaks in the middleweight division but after his most recent fight, a grueling three round affair against Ronny Markes in which he was overpowered by the former light heavyweight, he decided to make the drop down to 170 pounds.

Kenny Robertson got one shot in the UFC last March, but failed to impress and was stopped by Mike Pierce. He received his walking papers but after scoring an awesome spinning backfist knockout of Lucio Linhares, he's back in the UFC after stepping in for an injured Jon Fitch.

Will "The A-Train" keep rolling now that he's at welterweight? Can Robertson get the bad taste of his last UFC stint out of his mouth? What's the key to victory for both men tomorrow night?

How he got here:

How he gets it done: Simpson is going to be a very large welterweight and he needs to utilize that size advantage heading into this bout. He's going to be bigger, stronger and taller than Robertson so that means the clinch and his solid wrestling are going to be his friends.

Expect to see Simpson close the distance and really lean on Robertson, forcing him to carry some of his weight and gas out his arms and shoulders. If he can dump Robertson on the ground, he definitely should. On the canvas, Simpson can be an animal with ground and pound and I definitely expect to see some big punches and elbows from "The A-Train" on the canvas.

If he feels like standing with Robertson, that wouldn't be a bad idea, especially if it's after he's worn him out a bit. Simpson still has some nice power on the feet and if he can clip Robertson, it can definitely be lights out.

How he got here: Kenny Robertson is a finishing machine. The Illinois native started his mixed martial arts career with 10 straight victories which included nine stoppages. His performance caught the eyes of the UFC brass, who brought him in to face Mike Pierce at UFC 126.

During that fight, Robertson could not deal with Pierce's power and pace and was finished in the second round, losing for the first time in his professional career.

Afterwards, he was released from the promotion and had some difficulty finding fights. Since his release, he faced UFC veteran Lucio Linhares and scored a very impressive spinning back fist knockout last October. He hasn't fought since, but when Jon Fitch was injured, the door was opened for Robertson to make his UFC return against Aaron Simpson tomorrow night.

If Robertson has a chance, it has to be by taking advantage of Simpson's potential conditioning issues after making the cut to welterweight for the first time. He should really push a hard pace and try tire "The A-Train" out.

If Simpson begins to slow down like he's done in the past, then Robertson could take advantage both with his striking or perhaps even his ground game. It'll most likely be his striking though Simpson has really never had any issues against Brazilian jiu-jitsu black belts in the past.

Fight X-Factor: The biggest X-Factor for this fight has to be Aaron Simpson's weight cut. At 37 years old, he's no spry chicken and that's a pretty late time in your career to be cutting down to 170 pounds for the first time. If his body doesn't react properly to the cut, he could find himself completely gassed out by the midway point of the first round.

If he looks great in terms of the cut, then more power to him because he's going to have a really good chance of putting a hurting on Robertson.

Bottom Line: This fight has some potential. Robertson is aggressive and is a finisher, whether he's the one getting the knockout or submission or he's the one getting finished. He'll likely push Simpson into making this an exciting bout. Simpson is hit and miss when he's competing, but Robertson will likely force him to engage and that's always a good thing for the fans.

Who will come out on top at UFC on FUEL TV 4? Tell us your predictions in the comments below!