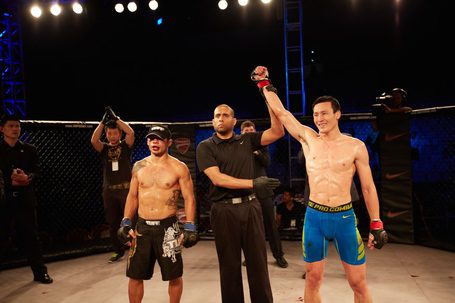 Events were held in both India and China this weekend with RUFF 4 taking place in Honhhot and FCC 6 in Mumbai. Wang Guan was the main winner at RUFF 4 as he ground out a unanimous decision victory over BJJ black belt Sandro Da Silva while Nitin Gaikwad and Goran Pandey both earned title shots at FCC 7.

Guan is a Sanda and Muay Thai champion and he improves to 9-0-1 with this win. It was also announced after the show that the only man he had ever failed to beat, Haotian Wu who he drew with in 2007, had signed with RUFF and would be making his debut against Rodrigo Caporal at RUFF 5.

South African Muay Thai specialist Irshaad Sayed showcased a rapidly improving ground game by submitting Jumayi Ayideng in the second round of their rematch and he improves to 4-2 with this win. The only man to ever beat him, Jumabieke Tuerxan, was pulled off the card because his proposed opponent did not have the necessary paperwork.

Full results from both shows after the jump.

The RUFF fighters are competing to win a million RMB in prize money and Zhifa Shang in the flyweight division took a big step in the right direction when he handed Rijirigala Amu the first loss of his career while in the lightweight bracket Thai fighter Arthit Hanchana submitted Lipen Zhang in another rematch.

Over at FCC 6 the main attraction was the two title eliminators. In the penultimate fight of the night Judo practitioner Gaurav Pandey booked his shot at the welterweight belt currently held by Sandeep Yadav with a quickfire ground and pound win over Shrikant Sathe.

The final fight of the night saw 18 year old Alfan Hashmi take a big step up in only his second fight when he took on the much more experienced Gaikwad. The younger fighter had been the pre fight favourite but he was battered for the best part of three rounds until the doctor was asked to assess the damage to his eye and deemed him unable to continue.

With this win Gaikwad improved to 3-1 and will fight for the middleweight title against Javed Mulla who is also 3-1. It will be a rematch of a fight which the defending champion won by submission at FCC 4 last November.