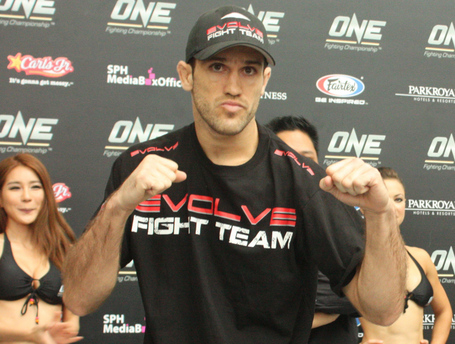 After Phil Baroni's technical knockout loss last weekend it was widely reported that he would no longer be allowed to face Roger Huerta at ONE Fighting Championship: 'Destiny of Warriors' which is set for Stadium Negara in Kuala Lumpur on June 23rd.

His replacement was today revealed to be Brazilian lightweight Zorobabel Moreira who was last seen submitting Felipe Enomoto at ONE FC: 'Battle of Heroes' in February. Although both generally compete at 155 lbs the welterweight limit set for the original fight between Baroni and Huerta will still be in place.

Moreira is a Brazilian Jiu-Jitsu (BJJ) world champion who holds a 6-1 professional record and defeated another UFC veteran, Andy Wang, when he made his ONE FC debut last September. He is a member of the fight team at Evolve MMA meaning that he trains all year round regardless of whether he has a fight booked or not.

"Zorro" found himself in a similar situation last June when he was offered a fight with Ferrid Kheder at DARE Championship at just seven days notice. What was supposed to be his lightweight debut became a welterweight contest when Kheder missed weight by a mile but Moreira was undeterred and won a comfortable unanimous decision victory.

Although he will only have two and a half weeks to prepare to face Huerta and is moving up in weight the BJJ black belt believes he will be ready come June 23rd.

"I train every day with the fight team at Evolve MMA and they are world champions in Muay Thai or BJJ or boxing and we have Heath Sims now who was in Olympics for wrestling and they push me so hard all the time. I was already helping Rich Franklin who is fighting UFC soon and first Eddie (Ng, now injured), then Brian (Choi, his replacement), Mitch (Chilson) and Brodinho (Leandro Issa) who fight at ONE FC and sparring with them."

Huerta will be the highest calibre opponent Moreira has ever faced but he says he had no hesitation in accepting the fight even at short notice.

"I trust my coaches Chatri (Sityodtong) and Heath (Sims) and they always decide who I fight. I am happy to fight again and I know he is very famous and very strong fighter, very aggressive. For sure this will be a good fight, I think he is little bit bigger but I am happy because I do not need to think about my weight too much for this fight."

Huerta was one of the fastest rising stars in the UFC as he put on a series of fight of the night performances which saw him rewarded with a place on the cover of Sports Illustrated, the first ever mixed martial artist to receive this honor.

However his career has stalled in recent years and he has been beaten by the likes of Gray Maynard, Pat Curran, Eddie Alvarez and most recently War Machine. Huerta will be desperate to get back to winning ways and to show he can be a force to be reckoned with while this is an opportunity for Moreira to cement his status as one of the fastest rising prospects in Asia.