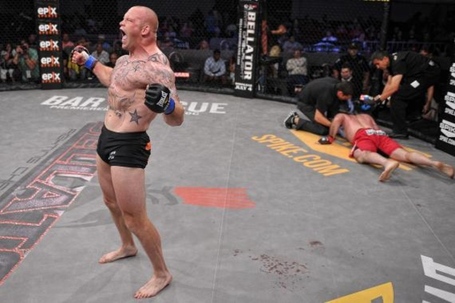 Travis Wiuff has competed an astonishing 82 times on the professional stage for mixed martial arts. He has competed against world class talents and currently has went under a rejuvenation at light heavyweight for Bellator Fighting Championships.

The only thing people say when Travis Wiuff's name is mentioned is how does that spell View?"

Wiuff, is currently sitting in the semi-finals of the Bellator light heavyweight tournament and the best part of this story-he already defeated the champion, Christian M'Pumbu at Bellator 55. 'Diesel' has been running wild as he is undefeated in the promotion and hasn't lost since a 2010 defeat at the hands of UFC castaway, Tim Hague.

How do you view this extended story of a once forgotten character of mixed martial arts (MMA)?

It has been almost seven years since Travis Wiuff has competed on a major North American stage when he last competed in the UFC at UFC 52 against Renato Sobral. Wiuff, was outclassed by Sobral who was in the midst of a title hunt as he locked an arm bard to defuse 'Diesel'.

Wiuff, would compile wins in smaller regional promotions when he got his crack at the legendary PRIDE promotion's stop in Las Vegas, Nevada at PRIDE 33. Wiuff would go on to lose to James Lee by way of knockout in the 2nd round.

Since the loss at PRIDE 33, Wiuff would go an impressive 11-1 in his next twelve fights that included winners over Ricco Rodriguez, Sean Salmon, Travis Fulton, Chris Tuchschererand Kazuyuki Fuita. Wiuff, would go 1-2 in the Segoku promotion overseas that included losses to Muhammed Lawal and Stanislav Nedkov.

With Elite XC, Strikeforceand the UFC not taking in the Elite Performance fighter, Wiuff went back on the regional grind. 'Diesel' went on an eight fight undefeated streak that included five stoppages, a no contest with Strikeforce light heavyweight Mike Kyle (originally Kyle won by a head kick knockout but later overturned for being after the bell) and a split decision over Jeff Monson. Wiuff, would have one last bump in the one road before his re-birth in Bellator, a knockout loss to Tim Hague.

M'Pumbu is one of the smallest light heavyweights and maybe the smallest to ever be a promotion's champion. For three rounds the size of Wiuff seemed to be too much as he moved M'Pumbu with little ease. It wasn't the best win in terms of excitement but, it did put Wiuff on the map again.

Wiuff, packed on two more wins over Anthony Gomez (Bellator 60) and an opening round win in the light heavyweight tourney over Chris Davis (Bellator 71). Wiuff is now scheduled to face Attila Vegh (26-4) in the semi-finals of the Bellator Light Heavyweight tournament, will he continue this path?

Stay tuned to MMAmania.com for all your Bellator coverage with Brian Hemminger