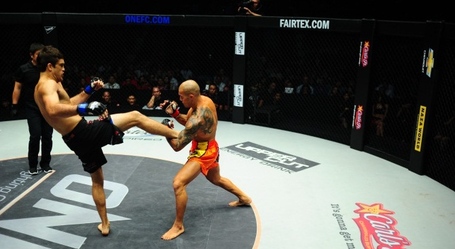 Photo of Roger Huerta (right) vs. Zorobabel Moreira via ONEFC.com

The big news of the weekend, not just in Asia but all over the world, was Roger Huerta's brutal knockout loss at the hands (and feet) of Zorobabel Moreira at ONE FC 4: "Destiny of Warriors."

In his first comments since that disappointing (and controversial) defeat, he had nothing but kind words to say about ONE Fighting Championship after making his debut for the Asian promotion.

"It was disappointing to lose like that but overall the experience of fighting for ONE FC was very positive and I feel very well looked after. I was very impressed by the first show, the Malaysian fans were awesome."

The loss has reportedly cost Huerta a fight with DREAM Lightweight Champion Shinya Aoki but ONE FC is set to put on 18 shows in 2013 and currently has cards booked for Manila on August 31st and Singapore on October 6th. Prospective opponents at lightweight include Eduard Folayang, Ole Laursen, Arnaud Lepont and Eddie Ng.

One possibility is that Huerta will stay at welterweight for a fight with Phil Baroni. This match up was originally set to take place at ONE FC: 'Destiny of Warriors' but was cancelled after Baroni suffered a surprise TKO loss to Chris Holland a couple of weeks before the fight. However there is a possibility it could be resurrected in time for ONE FC: 'Pride of a Nation' in the Philippines.

That card is also set to feature Shinya Aoki's ONE FC debut as well as Renato Sobral, Rolles Gracie, Igor Gracie, Gregor Gracie, Rey Docyogen, Kevin Belingon, Honorio Banario, Eric Kelly and Eduard Folayang. It will be one of the most star studded cards in the history of Asian MMA and the promotion is predicting a sell out at the 16,500 capacity Araneta Coliseum.

After an inauspicious start the Super Fight League is still going full steam ahead in signing expensive fighters to exclusive contracts. The latest are Jeff Monson, Satoshi Ishii, Rameau Sokoudjou and Michael Page. Page, from England, is a 2-0 welterweight, Sokoudjou is a light heavyweight Pride and UFC veteran with a 12-10 record but who is coming off back to back losses while Monson, 46-13-1 and Ishi, 4-2-1, are heavyweights who are best known for losing to Fedor Emelianenko.

Although interest in MMA in India has so far fallen well below expectations the SFL's reality show is still in the pipeline and should be hitting screens later this year. Meanwhile in Mumbai Full Contact Championship is getting ready to host its sixth event on June 30th which will be headlined by a middleweight scrap between Alfan Hashmi and Nitin Gaikwad.

This Saturday also sees the return of Ruff with the Chinese promotion's fourth card taking place in Hohhot and featuring Jumabieke Tuexan, Wang Guan and Irshaad Sayed. Look out for more articles about Ruff and FCC later in the week.