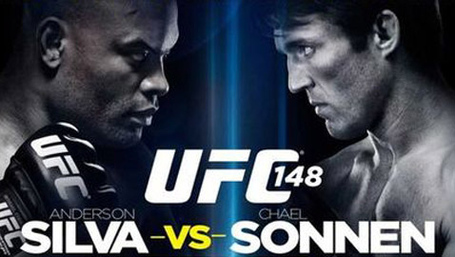 The conference call will begin at 2:00 p.m. ET. Scheduled to attend will be the headlining fighters for the evening: Anderson Silva, Chael Sonnen, Forrest Griffin and Tito Ortiz.

Silva is the current UFC middleweight champion, having won the title from Rich Franklin back in 2006. Silva is widely considered the best pound-for-pound fighter on the planet. He's still undefeated in the UFC today and will be looking to defend his title for a record 10th time against Sonnen, the only man to truly test him since he began competing in the world's best mixed martial arts (MMA) promotion.

Chael Sonnen is a former title challenger, having pushed Anderson Silva to the limit at UFC 117 back in 2010, winning the first 4 1/2 rounds. He's one of the best wrestlers in the sport today and has taken his game to an entirely different level, and has been one of the most dominant fighters since 2009 with his only loss being that late fifth round submission to "The Spider." He's been clamoring for a rematch for a long time and it's finally going to happen.

Forrest Griffin and Tito Ortiz are both former UFC light heavyweight champions. Ortiz will be competing in his retirement fight and will also be inducted into the UFC Hall of Fame in the lead up to their trilogy fight. Both men have battled each other twice in the past, with both having won a split decision. Griffin's career is also winding down as he recently was defeated by Mauricio Rua in another rematch. The trilogy fight against Ortiz has plenty of potential.

We'll have all the updates from the UFC 148 conference call after the jump:

Brian Hemminger here. The press conference is scheduled to begin at 2 p.m.

Chael Sonnen: I don't do characters. I got serious about this fight a long time ago. I've been training combat since I was 9 years old.

Dana White: People aren't showing up to hear this guy give speeches. They show up because of what he can do in the Octagon. He could be a deaf fucking mute for Christ's sake. What he does in the Octagon is amazing.

Anderson Silva: Chael is a criminal. He's been convicted of crimes. He doesn't deserve to be in the Octagon. When the time is right, I'm going to break his face and break every one of his teeth in his mouth.

Anderson Silva: I don't live in the past. The things in the past are in museums. Playtime is over. I'm gonna beat Chael like he's never been beat before. There's no more talking. I'm going to beat his ass out of the UFC. He's never gonna want to fight again after I'm done with him.

Chael Sonnen: The stakes are pretty high on this one. It's not like I'm trying to score points on the guy, he's trying to do damage to me.

Dana White: There's no doubt that we expect over 1 million buys here. We expect UFC 100 numbers.

Tito Ortiz: I'm just preparing for the fight of my life. I've been waiting 15 years for this to give my last 15 minutes. 3, 4, 5 hours a day. I know how he fights and how he likes to fight. I'm going to try to absorb as much as I can in the next week. I'm gonna show how much this means to me. I'm not gonna play around, talk smack. I'm coming to fight. Being inducted into the Hall of Fame, I'm very thankful to Dana, Tito, Lorenzo for having faith in me and showing that I've grown and I'm thankful for the UFC.

Forrest Griffin: If you look at the history, this fight is interesting. The thing is, this is his final fight. Everything that's happened recently, the last couple fights haven't gone the way he's wanted to and I'm doing the same thing. My goal is to never lose two fights in a row.

Dana White: I'm still working on coaches and info for the next seasons of TUF.

Anderson Silva: I'm just gonna make him pay and make him eat everything he said not only about myself but about my country. I'm going to make him regret disrespecting any fighter. I'm going to beat him like his parents should have beat him to teach him manners because he's disrespectful. I'm not playing anymore.

Anderson Silva: In the first time we fought, he stepped out the loser and he's going to step out this time too. The only difference this time is he's going to need a plastic surgeon after this fight.

Dana White: There were bad words between Rampage and Rashad but what makes this one crazy is I've promoted every Anderson Silva fight in history and he usually doesn't get fired up like this. He's usually very respectful. He never talks like this.

Dana White: It's unfortunate that these guys were involved in a sport where you're only as good as your last fight. For Clay Guida, he was a star until the third round of that fight and everyone turned on him and started cheering for Gray. It's a crazy sport.