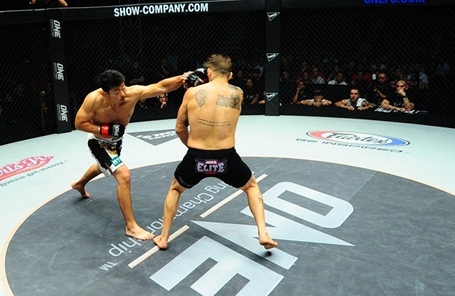 ONE Fighting Championship came to Malaysia for the first time and filled the Stadium Negara for an action packed and controversial card. The main talking point of the night was Zorobabel Moreira's brutal soccer kick KO of Roger Huerta.

The Brazilian made full use of the ONE FC ruleset to knock his opponent out cold with a perfectly timed kick as Huerta lay dazed on the ground. It was an emphatic finish to an entertaining co-main event which saw the Brazilian prospect take a big step up the lightweight ladder.

In the final fight of the night Renato Sobral made a triumphant return after 18 months out with injury as he submitted Tatsuya Muzino early in the opening round. The Japanese fighter paid the price for trying to mount a ground and pound offence with 'Babalu' on his back as the former UFC title challenger slapped on an inescapable armbar.

For the 8,000 or so fans in attendance the highlight of the night was Adam Kayoom's unexpected decision victory over Gregor Gracie. The Malaysian was close to being stopped in the opening round as his opponent was able to take him down and keep him down and land a series of unanswered strikes.

The second stanza followed the same pattern although even with Kayoom on his back Gracie was unable to do too much damage and never looked like finishing the fight with a submission. At the very end of the round the tide turned with Gracie visibly exhausted and unable to defend himself as Kayoom scored with leg kicks and elbows.

In round three the Brazilian was still struggling and Kayoom took advantage to tee off with kicks to the legs and head. With a minute to go he stuffed a takedown and, finding himself in top position, unloaded a barrage of punches and elbows which were enough to win a decision on al the judges scorecards.

Speaking after the fight Kayoom paid tribute to the Gracies saying, "I had to separate Gregor from his family when I was preparing for this fight because without the Gracies I wouldn't be here now doing this, I would probably be working in an office somewhere, wishing I could head kick my boss."

Earlier in the night another Malaysian, Peter Davis, put in an emphatic performance to blow away Singaporean Kim Hock in under a minute. The beginning of the end came when Davis threw a back kick which connected clean with the jaw of his opponent and he finished the fight with a series of vicious knees.

Leandro Issa had the biggest opportunity of his career when he took on Masakazu Imanari and he seized it with both hands, staying away from the Japanese veteran's leg locks and scoring enough takedowns to ensure there was no doubt about the winner when the third round finished.

Eric Kelly improved to 7-0 with a win over Bae Young Kwon after a fight which didn't quite live up to expectations. The opening round was very entertaining with the Korean using his Judo to good effect with a series of trips and throws and the Filipino repeatedly escaping and bouncing back to his feet.

After that the pace of the fight slowed with Kwon completely unwilling to engage his opponent in the stand up exchanges. The Road FC fighter was also issued with a yellow card for elbows to the back of the head and this probably cost him the fight as all three judges gave the nod to the URCC Featherweight Champion.

Arnaud Lepont appeared to be headed for a decision loss when, after an action packed opening round, Brian Choi began to systematically implement his wrestling based game plan. The French fighter looked to be fading from the fight when he stuffed a takedown early in the third round and transitioned from a guillotine attempt to a rear naked choke which forced the Korean to tap.

The Stadium Negara was completely sold out and at the end of the show ONE FC announced that the next event would be taking place in the 16,500 capacity Araneta Coliseum in Manila on August 31st.

Renato Sobral def. Tatsuya Mizuno by submission (armbar) at 0:31 of round one

Zorobabel Moreira def. Roger Huerta by KO (soccer kick) at 3:53 of round two

Mitch Chilson def. AJ Vaa by submission (rear naked choke) at 1:39 of round one

Marcos Escobar def. Rodrigo Praxedes by submission (d'Arce choke) at 1:05 of round three

Peter Davis def. Kim Hock Quek by TKO (knees to the body) at 0:55 of round one