The main event of the UFC on FX 4: "Maynard vs. Guida" fight card that took place last night (Fri., June 22, 2012) at the Revel Casino in Atlantic City, New Jersey, featured a lightweight showdown that went all five rounds and ended via split decision.

So, of course, we must consult the wizards at Fight Metric for the numbers.

Gray Maynard and Clay Guida engaged in a bizarre 155-pound tilt that featured "The Bully" pressing forward and missing a lot of punches while "The Carpenter" circled out and also missed a lot of punches.

Actually, according to the numbers, Maynard whiffed 177 times. Guida? He missed a shocking 278 times in 25 minutes spread across five rounds.

Don't take my word for it, though. Check out the complete breakdown (courtesy of Fight Metric) after the jump. 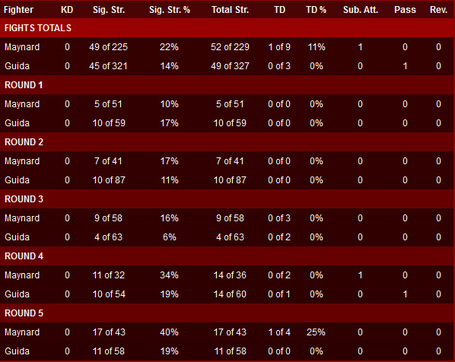 What sticks out more than anything is the shocking lack of efficiency in the early rounds. Maynard was 5 of 51 in round one? Guida was 4 of 63 in round three?

That's an incredible rate of failure to connect on punches.

The stats that are available seem to indicate the decision was just. Maynard landed more total strikes, more significant strikes, he had one takedown attempt and one close submission attempt.

Everyone agreed with the findings here?

For more on the Maynard vs. Guida fight click here. To watch highlights of the bout click here. And for complete results and blow by blow coverage of all the UFC on FX 4 action click here.

Props again to the fine folks at Fight Metric. Check them out by clicking here.