The two middleweight veterans, who meet in a catchweight bout of 190-pounds this weekend (June 23, 2012) at the UFC 147 pay-per-view (PPV) event from the Estadio Jornalista Felipe Drumond in Belo Horizonte, Brazil, went nose-to-nose at the conclusion of today's pre-fight press conference.

You can watch the full video replay right here.

Also facing off for the meanest mug in the game was grappling phenom Fabricio Werdum and Chicago cop Mike Russow. You can catch their not-so-friendly eye contact after the jump. 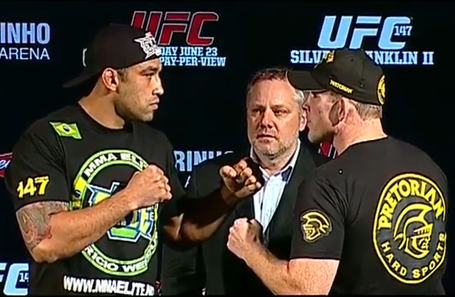 Remember: MMAmania.com will provide LIVE round-by-round, blow-by-blow coverage of the main card action on fight night, which is slated to air at 10 p.m. ET on pay-per-view. The latest quick updates of the live action will begin to flow earlier than that around 6:45 p.m. ET with the "Prelims" bouts on Facebook and FX.

For all the latest UFC 147 news and notes click here.