The whole card is going to be available for just $10 and the undercard, which consists of the first four fights, will be streamed free of charge. For more information about watching the show, which begins at 8am Eastern Time and 5am Western time for those in the US visit: http://www.onefc.com/live-streaming.html.

If you want to know who 9-0 Karayev is then you need look no further than sherdog and youtube. He has nine stoppage wins to his name, knows how to knock people out and is an aggressive stand up fighter with a decent submission game.

Sancha'an is more of an unknown quantity, he has a record of 3-0 or 4-0 depending on what you read but there is no youtube footage and no way of knowing how good the opponents he has beaten are. He is a member of Team Lakay and trains under renowned coach Mark Sangiao and alongside team mates Eduard Folayang, Kevin Belingon and Rey Docyogen so he will know what he is getting himself into here.

Karayev is only 20 years old and looks a very exciting prospect but Sancha'an, 21, will be his toughest test yet and is probably a higher calibre fighter than anyone he has previously faced in Malaysia. Team Lakay fighters always have excellent stamina and like to push the face but Karayev, who is a long term resident in Malaysia, has proven one punch knock out power.

Sancha'an will probably look to strike from the Wushu sideways stance just enough to set up a takedown and grind Karayev down. The Malaysian based fighter should have a big fanbase and will look to make it ten wins out of ten with a quickfire KO if he can.

This is a match up which is sure to divide the crowd at the 10,000 capacity Stadium Negara. Davis is the Malaysian who is best known for combining a successful modelling career with his mixed martial arts commitments (currently featuring in a TV series called 'Hot Guys Who Cook'!) while Hock is a rising star in Singapore.

There is a 10 year age gap between the two and Hock was just 14 when Davis made his MMA debut. The 21 year old Singaporean made a very impressive start to his MMA career by submitting Major Overall in the second round at ONE FC: War of the Lions in March and looks a real prospect.

Davis didn't do quite so well when he first featured for ONE FC in February although he pulled out a last grasp submission win with the final bell imminent after three fairly uneventful rounds. He will have the Malaysian crowd behind him and will be looking to make it a more entertaining fight this time around.

Davis, who holds a black belt in Kung Fu, has a very elusive style and likes to evade opponents before attacking from unorthodox angles. Hock is a come forward fighter who is a national boxing champion and the outcome of this fight could depend on whether he is able to walk Davis down and land combinations or whether the model turned mixed martial artist can frustrate him with his footwork and counter effectively.

I wouldn't like to hazard a guess as to who has the better ground game but neither fighter will want to be submitted and it could come down to who has the better stand up. Praxedes' one MMA fight was too brief to be able to judge from while Escobar has yet to even make his debut so it will be interesting to see which fighter has mastered the striking side of the game more proficiently.

Praxedes lives and trains in Phuket so you would expect him to have a good level of Muay Thai but Escobar was originally scheduled to make his ONE FC debut in February and went back to Brazil to train. It has twice been delayed but this means he has spend months training everyday alongside the likes of Jose Aldo which won't have done his progress any harm at all.

If these two stand and trade then someone is going to get knocked because with stand up being neither man's speciality a mistake will be made sooner or later. If it turns into a wrestling and grappling match it could be more of a drawn out affair but Escobar, who was the first person to ever open a BJJ school in Malaysia, will want to put on a show for his watching students.

ONE FC Destiny Of Warriors: Mitch "The Dragon" Chilson vs AJ "Pyro" Lias Mansor (via OneFCMMA)

Both fighters are coming off losses, Chilson to Eric Kelly (who is fighting Bae Young Kwon) and Mansor to Major Overall (who was last seen losing to Kim Hock). The American is a very underrated fighter who has pro Muay Thai experience, a blue belt in BJJ and the potential to be a serious force in the ONE FC featherweight division.

Mansour brings a similar skill set as he has fought Muay Thai in Thailand and has a strong ground game as well as being a national Silat champion. Chilson's stand up is probably better but the Malaysian feels he has the edge on the ground.

As Chilson trains everyday with the BJJ black belts at Evolve MMA he is unlikely to be terrified by the prospect of a takedown but he will probably be happy to keep the fight standing. Mansour is very light on his feet and likes to bounce around and while a moving target is difficult to hit he probably sacrifices some of the power you get from planting your feet before you throw strikes.

If Chilson can back Mansour up against the cage I expect him to unload with strikes while the Malaysian's keys to victory will be to stay out of trouble in the stand up exchanges and get the fight to the floor.

Part two coming tomorrow with the other six fights including Tatsuya Mizuno vs Renato Sobral, Roger Huerta vs Zorobabel Moreira and Leandro Issa vs Masakuzu Imanari... 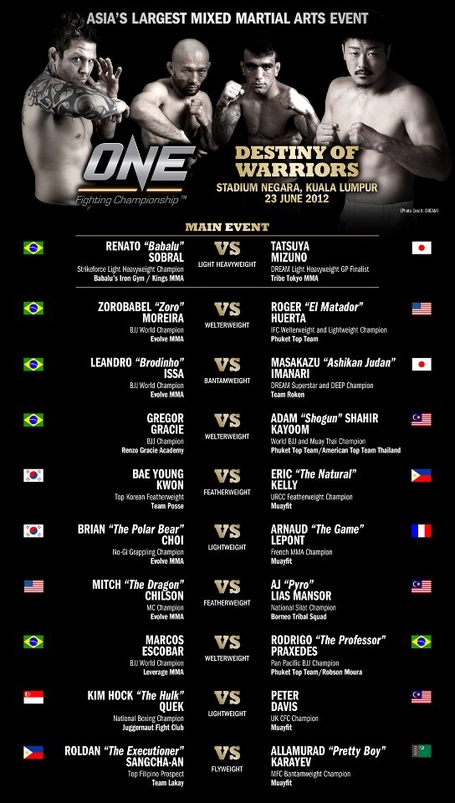