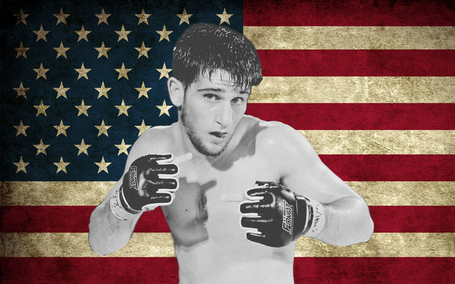 Andrew Leone is looking to make a small piece of history tomorrow night (June 16, 2012) by becoming the first ever Road FC Bantamweight Champion and the first American to win a title in Korea. It would be an impressive achievement for a fighter who wants to compete at flyweight but in all probability he will have to get past one of the top 135 lbs fighters in the region, Kyung Ho Kang, in the final if he is to succeed .

The two have already faced each other once at Road FC 6 but Kyung missed weight meaning that he was deducted a point per round. By all accounts the Korean dominated the fight but Leone was able to hang in there for three rounds to automatically win a decision.

An injury saw Kyung reinstated in the competition at the quarter final stage and now him and Leone find themselves one win away from a rematch. The American has been based in Asia for several years, training in Ubon Ratchatani, Bangkok, Singapore and now Phuket Top Team.

He caught up with MMAmania.com to talk about his preparations for the final rounds of the Road FC Bantamweight Grand Prix and his ambitions for the future,

How is training for the tournament going?

It's going well! The last time with Road FC I didn't get to do a full training camp, so it's nice to be able to prepare myself fully and and make sure I'm going in there in the best shape I can be in. I've prepared with Rodrigo Praxedes, one of the most handsome men in Asia, and Will Chope, Brad Terrey, Roger Huerta, Adam Kayoom, Olavo Abreu and Boyd Clarke!

Have you ever fought two times in a night before and how are you preparing yourself for that?

Yes. I've fought two times in a night for a small MMA promotion in Bangkok called Naksu, where I fought twice and won a tournament belt on the same night. It didn't end up on Sherdog but it was a fun experience. It wasn't of the calibre of Road FC, a lower level talent pool, but competition is competition and I couldn't resist the opportunity.

Do you have a specific gameplan for the tournament, are you hoping to finish the first fight fast?

No we're looking for a gruelling war in the first fight, REALLY tough (I assume this is said in a sarcastic tone...) but it's OK the second fight will be quicker, we're gonna finish it fast.

You struggled against Kyung Ho Kang the first time you fought him, are you expecting to fight him again in the final and if so what are you going to do differently this time?

When we fought Kang, we only had three weeks training, took the fight on short notice and we knew we would just have to get to the decision and the fight would be ours. This time out is different. We don't care if Moon (Kang's opponent in the semi final) or Kang wins, we still have the first fight to think about.

Will this be your last time fighting at bantamweight?

Yes, this next event will be my last fights at bantamweight, for the time being.

When are you hoping to make your ONE FC debut?

In August. We're looking forward to fighting in the Philippines in Manila at flyweight.

There are a lot of flyweights like Allamurad Karayev (9-0) who is fighting on the next show and Rey Docyogen (10-0) plus Kevin Belingon (9-1) is expected to drop down. Do you have your eye on anyone in particular?

We have our eyes set on Roy Docoygen.

How have you enjoyed the experience of fighting in Korea?

Yes. I love South Korea, Seoul is a beautiful place, I love the feel of it, the vibe. It is a special place.

How different do you think your life and your fighting career would be if you had stayed in the US?

It would have been a lot different. I'd have been in upstate New York, most likely fighting out of Team Bomb Squad, progressing through the regional circuit up until the big leagues, and I'd have been training and sparring with different coaches and partners, and most likely would be a different fighter, with different experiences. But I like the road I am on now, and I look to continue this road with my brother (Bellator fighter Anthony Leone) who comes out here to Phuket Top Team in a week.

Are you following the UFC's flyweight division and is fighting for them something you think about?

Yes. I'm a fan of the division, of course just like every other monkey I size up my division! Us little guys are always exciting too, it's always fun to watch the flyweights!

How much would it mean to you to be the first Road FC Bantamweight champion?

It would be a great honour. It's gonna be awesome! We'll be the second foreigner to be the champion in Road, after the middleweight champion Shungo Oyama, and he's Japanese! I'm so excited to go back there and fight in front of the Korean fans. They are some of the best fans you can imagine. Road is big in South Korea too, they have their own reality show, their events get televised live. It's great to go over there and fight for Road, and it will be awesome to win their bantamweight title!

Road FC 8 'Bitter Rivals takes place in Wonju on Saturday night. Andrew Leone faces Min Jung Song in the semi finals of the Bantamweight Grand Prix, the other semi final is between Kyung Ho Kang and Jae Hoon Moon and also on the card are Bob Sapp and Denis Kang.