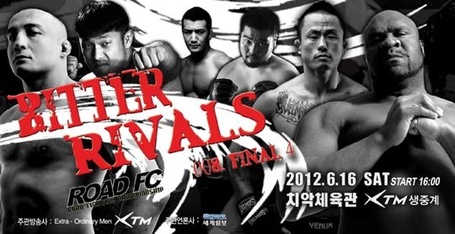 Road FC's eighth event takes place in Wonju this weekend (Sat., June 16, 2012) and will feature some of the most exciting prospects in the country, the conclusion of the Bantamweight Grand Prix and the return of Denis Kang.

The card will also, unfortunately, be tainted by the presence of Bob Sapp.

The latest leg on Sapp's supposedly lucrative 'tour of shame' (courtesy of Fight Sport Asia) will see him presumably tap to strikes early in the opening round against Korean middleweight Kim Jong Dae to register the ninth consecutive loss of his MMA career.

Hopefully the presence of 'The Beast' will lure in a lot of casual spectators because the remainder of the card is stacked full of competitive fights. Road FC has successfully filled a glaring gap in the Korean market for a domestic MMA promotion and this will be the third card of 2012 and the first to ever take place outside of Road FC's traditional stronghold of Seoul.

It will see the conclusion of the Bantamweight Grand Prix with the inaugural Road FC 135 lbs champion being crowned. Shungo Oyama prevailed in the 185 lbs tournament earlier this year, beating three Korean fighters, and Andrew Leone has a chance to become the second foreigner to claim a belt.

The American, who is signed to ONE FC, is up against Min Jung Song in a match he is favoured to win. The other semi final sees tournament favourite Kyung Ho Kang take on Jae Hoon Moon knowing that a win would set up a rematch with Leone who was the last man to beat him.

Leone actually booked his place in the last four by beating Kang by technical decision although the Korean was reinstated in the quarter finals following an injury to another participant. He missed weight for the fight with Leone and was deducted a point per round which handed the initiative to the American who knew that he only needed to go the distance to win.

If Kang can make the 135 lbs limit, which he did for his second quarter final fight, he will be confident of defeating the wrestler who is likely to drop down to flyweight regardless of what happens in this tournament. Both have to win their semi finals first but it would be a surprise if the final was not a rematch between Leone and Kang.

Denis Kang's return to Korea to fight for Road FC has been something of a disappointment as he has lost back to back fights and will be looking to get back to winning ways against Hae Suk Son who lost to Oyama in the final of the Middleweight Grand Prix in February.

One of Korea's brightest young talents will be in action as 21 year old welterweight Jun Hee Moon takes on Seok Mo Kim. Moon is 5-2 and his only two losses were in Japan, with the most recent coming in the third round of a fight with Ryo Chonan.

Kim has bounced back from the disappointment of being defeated by Gregor Gracie at ONE FC and then Adam Kayoom at DARE to secure back to back stoppage wins for Road FC and is a dangerous striker who will provide a real test of Moon's credentials.

Korea is second only to Japan in terms of Asian countries producing top class talent and it is about time it got a top class MMA promotion of its own. Top featherweight Bae Young Kwon has already graduated to 'the UFC of Asia' and will be on the ONE FC: 'Destiny of Warriors' card in Kuala Lumpur later this month and if there is more talent of this stature in the country Road FC will inevitably unearth it.