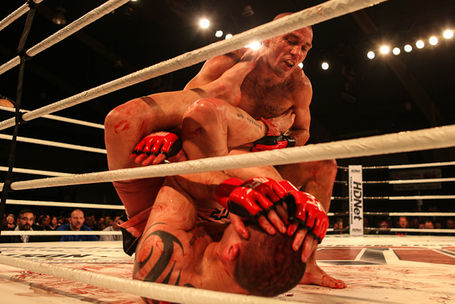 For the first time in years as a fan of mixed martial arts (MMA), I found myself disgusted while watching the main event of MFC 33 last night (Fri., May 4, 2012) between Nathan Coy and Ryan McGillivray. It had nothing to do with amount of blood, or the pounding that McGillivray was going through.

No, it had to do with the actions taken by McGillivray's head trainer, Greg Jackson, between the third and fourth rounds.

After three brutal rounds of punishment at the hands of Coy, a clearly dazed and blood drained McGillivray had to be assisted to his corner by his coaching staff. His head coach, Jackson began slapping his face and shoulder while telling the near unconscious 25-year-old to "wake up" and that "he can still win this fight."

Even veteran trainer and commentator Pat Militech, who was calling the fight for HDNet, couldn't believe what he was seeing and hearing out of the fighters corner, stating that Ryan's camp "should throw in the towel" for their unresponsive fighter.

Luckily for McGillivray and his family, the referee and ringside doctor had seen enough and decided to stop the fight before he took any more unnecessary damage.

Still, this is an issue in MMA that hardly seems to be addressed and Jackson is at the forefront of it. As the most recognizable trainer in the entire sport, he should be held to a higher standard. This also isn't the first time there have been issues with Jackson's instructions to his fighters between rounds. He also notably ignored Georges St. Pierre when the welterweight champion told him he couldn't see out of one of his eyes during his UFC 129 title defense against Jake Shields.

It's entirely possible Jackson is simply trying to motivate his fighters to go above and beyond. It's a rough game, after all, and every little boo-boo isn't cause to throw in the white towel.

Then again, it certainly looked like McGillivray needed someone to save him from himself. Maniacs, what are your thoughts on Jackson's actions last night?

What Greg Jackson did while cornering Ryan McGillivray was ...