Share All sharing options for: UFC's Jon Jones arrested for DUI in New York after crashing car into a pole

Remember that sweet Bentley Ultimate Fighting Championship (UFC) Light Heavyweight Champion Jon Jones was riding around in that reportedly cost $190,000 (pic after the jump)? Yeah, it's been totaled.

That's because "Bones" crashed it into a pole in the early morning hours today (Sat., May 19, 2012) in Binghamton, New York. But that's not even the worst part.

Once police arrived on the scene, Jones was arrested for driving under the influence. TMZ.com has the story:

Law enforcement sources tell TMZ ... Jones was involved in an accident at around 5:00 AM in Binghamton, NY. We're told the car -- which Jones crashed into a pole -- was totaled and cops arrested Jones on the scene for DUI.

According to our sources, Jones was taken into custody by Broome County Sheriff and bailed out a few hours later ... by his mom. Jones is from nearby Ithaca.

This comes less than one month after Jones successfully defended his 205-pound title with a unanimous decision victory over former teammate Rashad Evans at UFC 145 in Atlanta. His next fight is scheduled for Sept. 1 against Dan Henderson at UFC 151 in Las Vegas, Nevada.

Stay tuned to MMAmania.com for more on this story as it develops. 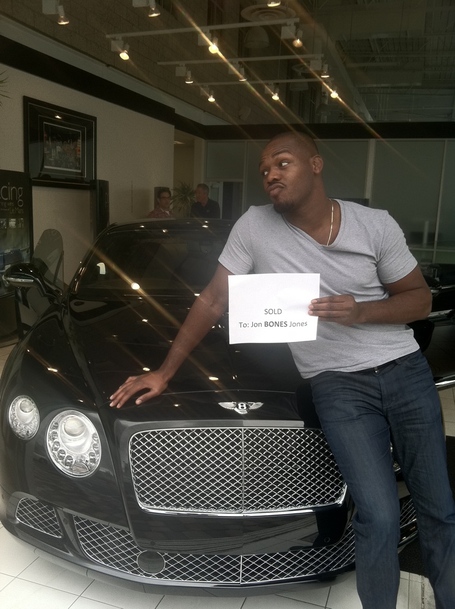